For six weeks this summer I was both a student and a research assistant at a remote field station in the middle of the Peruvian Amazon. I spent the majority of my time there studying two of its most dynamic and fascinating mammal species, the emperor and saddleback tamarins. Much of my days there were spent in the forest, following these animals, which left very few moments to properly reflect on my experiences and understand the emotions that I was feeling. Being back in the United States has given me a chance to do this, and I have embraced the opportunity wholeheartedly. However, it is difficult to reflect on my time spent there without being reminded daily of one of my favorite poems, “The Sea” by Lord Byron. Although it is challenging to express in a single blog post the memories that defined my experience in the forest, I believe that this poem provides an excellent window into its emotional effect on me:

There is a pleasure in the pathless woods,

There is rapture on the lonely shore,

There is a society where none intrudes

By the deep sea, and music in its roar:

I love not man the less, but nature more,

From these our interviews, in which I steal

From all I may be, or have been before,

To mingle with the universe, and feel

What I can ne’er express, yet cannot all conceal.

I found pleasure in those pathless woods around the field station and I found myself trying to explain why I felt this way. Was it the sight and sound of monkeys, the animals that had inspired my love for zoology? Was it the opportunity to learn in an environment that I had only known from books? Or was it because I was conducting ecological research in South America, something that has led many a biologist (including Charles Darwin himself) to great scientific discovery? I found that all of these reasons were contributing factors to the uniqueness of my experience; however, what seemed to truly inspire and humble me was the knowledge of the scope of nature’s diversity and the subtle unity that bound it and myself together.

The rainforest around the station was an evolutionary microcosm of sorts. It provided me with the chance to see Darwin’s doctrines in full swing. Examples of adaptation abounded in every animal that I studied. Primates utilized flexible limbs, grasping hands, and prehensile tails to meander gracefully along the treetops. So many creatures displayed beautiful pelages, from the large macaws to the smallest insects, imparting them with an incentive to mate or the ability to hide. Calls swelled the air, from the orchestrated duets of the titi monkeys to the animated chirpings of the tamarins, providing a wonderful glimpse into the communication that is vital to these animals’ lives. Pollinators darted between the trees as they sought out flowers, attracted by their color and shape. Ants marched deliberately on the ground, unwavering in the face of any obstruction they encountered (including my feet, from time to time). I find I could go on endlessly, describing the individual cases that enticed me. But what truly struck me was that, among all of this wonderful and sometimes disparate diversity, was a strong unity. It was very hard for me to understand at first. It was as if I were looking at an organized society where none was thought to exist. As I delved deeper, however, I soon found that it was this “ecological” unity that allowed the Amazon forest and its many constituents to thrive.

Each organism, though different in its appearance and peculiarities, was integrated into the landscape through its niche, much like the gears and cogs of an old grandfather clock. This community was defined by the whole of its members, with its many species only enhancing its stability and strength. I gained a newfound appreciation for this diversity in the many hours I spent in the Amazon, and with this appreciation came a strengthened understanding of the unity of the biosphere. Life’s many participants are disparate, yes, but they are connected, fortified by natural selection into an equilibrium of roles that promotes stability, renewal, and feeds the true beauty of Los Amigos. My time there, among this unity, only provided me with a greater impetus to continue to discover and understand it in the future.

But with this newfound realization came humility, towards both the forces of nature and the scope of my own life within it. Unfortunately, like many who have come before me, I previously tended to look at the world through the lens of my short lifespan. I often viewed nature through the window of my daily being, and typically only at those peculiarities that directly influenced me. Rarely did I consider that these forces extended far beyond the scope of my own existence. But now, after I truly immersed myself in their premier frontier, this truth is self-evident. My prior experiences through books, journals, and documentaries never permitted me to embrace this unity firsthand. The uniqueness of studying at Los Amigos showed me that I, much like the howler monkey or the caiman, was but another species on this planet (although one with a slightly bigger frontal lobe compared to my body size) and one that was just as much a cog in the wheels of the biosphere as any other species.

My decisions, and the decisions of all the other members of my species, reverberate in this web, affecting all its constituents. I came to understand that humans are not immune from this great ecological unity. Although we may distance ourselves from it, we are a part of it, shaped since the first ancestors of our line appeared some 6 million years ago (see Chen and Li, 2001). We rely on these connections for food, water, and air to breath. Our species has been shaped by these forces and connections, and will continue to be shaped as such for as long as our line exists. We cannot lose sight of this as we continue to move into the 21st century. Humans are an influential species in this biosphere, capable of changing our own environments to suit our needs. But we cannot sustain it by ourselves; rather, we need our ecological web and all the many species that contribute to it.  My stay at Los Amigos showed me that this diversity is worth defending, both for this generation of humans and all those who come after.

It is my hope that in the future I can continue to advocate for the preservation of these wild places, both in the Amazon and outside it, as a means to protect the bountiful species that reside there. Los Amigos answered many of the questions I had about the forest, but there are so many more left to be answered! I know that the more we seek to discover and understand about the Amazon, the more we will learn about ourselves and our connections with the other creatures that call it home. We cannot be afraid to look! Even Lord Byron, knowing that the sea can administer pain, does not let his fear diminish his love and respect for its majesty, always allowing him to return to enjoy it again:

For I was as it were a child of thee,

And trusted to thy billows far and near,

And laid my hand upon thy mane, − as I do here.

Chen FC, Li WH. 2001 Genomic Divergences between Humans and other Hominoids and the Effective Population Size of the Common Ancestor of Humans and Chimpanzees. Am J. Hum. Genet. 68, 444-456. 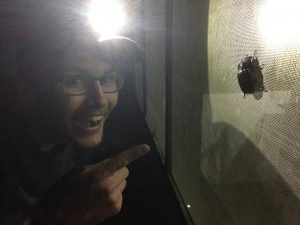 Note on the Author: Luke Fannin is a staff writer for FPI who spent several months working on a research project on tamarin vocal communication at the Estación Biológica Rio Los Amigos in Peru.