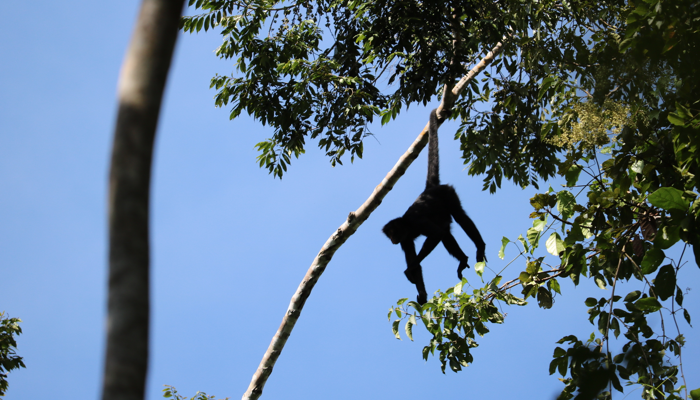 “A Trick of the Tail”: Prehensile Tails and Primate Evolution

When we look at ourselves in the mirror each morning, we are constantly reminded of our ape ancestry. For, like our fellow ape cousins – the chimpanzees, gorillas and orangutans – we lack something that most other primates possess: a long tail. Yet while apes have evolved other neat adaptations for arboreal living (see Hunt [2016]1 for these adaptations), for lemurs and monkeys, the tail is critical for daily life in the trees. Providing a source of balance while traversing narrow supports and aiding in weight distribution while clambering over unstable branches2, tails are a hallmark of monkey ecology and an essential component of their distinctive image. 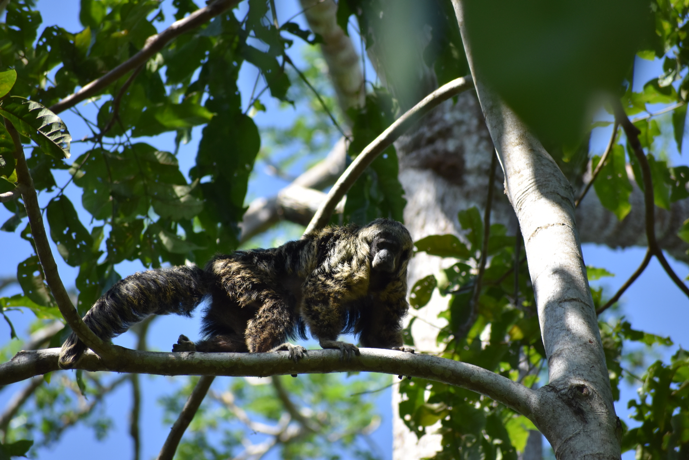 A Ryland’s bald-faced saki (Pithecia rylandsi) moving quadrupedally on top of a branch in the Peruvian Amazon. For most primates, including the saki, the tail is not prehensile, but rather has an essential role in balance and weight distribution. Photo by T. Matia.

Yet some monkeys have taken things one step further, evolving a prehensile tail. In these monkeys, their tail functions almost as a dexterous fifth limb, and is used for sturdy grasping and body support while moving2. Across all mammals, the prehensile tail is quite adaptive; it has independently evolved in six lineages of mammals, including marsupials, rodents and even some carnivores.3 It is thought that prehensile tails help animals move in tropical rainforest canopies, especially in those forests with large canopy gaps, fewer lianas and more fragile tree crowns.3 Yet other mammals also use their prehensile tails to anchor their bodies while they are feeding, such as the arboreal anteater, the tamandua3. Despite its usefulness, the prehensile tail is found only in two groups of primates: Cebus – the capuchin monkeys– and the atelines, a group that includes the howler (Alouatta spp.) and spider (Ateles spp.) monkeys. These monkeys are only found in Central and South America. In contrast, no primates in African or Asian rainforests have evolved similar structures. 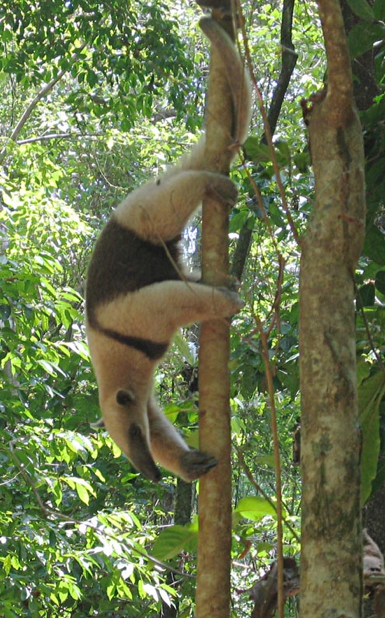 A tamandua (Tamandua tetradactyla), an arboreal anteater that possesses a prehensile tail. Here, it is using its tail for support while moving, but they also use their tails as anchors while they are foraging in insect nests. Photo source: Wikimedia Commons

At quick glance, it appears that these two groups of monkeys must be closely related because they share this unique feature. But DNA evidence states otherwise. In fact, capuchins share a closer evolutionary relationship with the non-prehensile tailed squirrel monkeys (Saimiri spp.) than with either spider or howler monkeys4. We therefore have another case of independent evolution of the prehensile tail, this time within the primate lineage itself. But could we tell that from comparing patterns in their tail anatomies or behaviors?

In spider and howler monkeys, the prehensile tail is long, making up a sizable portion of the animal’s total body weight. Capuchins, by contrast, have an unremarkable tail size; they don’t deviate very much from other non-prehensile-tailed New World monkeys in their tail proportions 5. While both groups have increased muscular development6 and neural innervation5 in their tails for strength and sensitivity, only the spider and howler monkeys have a dedicated region of their brains associated with tail control5. Capuchins do not have this region. Yet the most striking external difference is in the gripping surface of the tail7. For while the capuchin tail is fully haired and un-adorned, the tails of spider and howler monkeys have hairless, fingerprint-like friction pads on their grasping surfaces, covered with high densities of mechanoreceptors (specialized cells that transmit touch sensations)7. Compared to capuchins, the tails of spider and howler monkeys have more elaborate systems of mechanical strength, neural control, and tactile sensitivity. And yes, every tail print is unique, just like their fingerprints.

But does this anatomical difference translate into different patterns of behavioral usage? For spider and howler monkeys, the prehensile tail has diverse roles in both locomotion and feeding.  Spider and howler monkeys engage in below branch suspensory foraging, relying on prehensile tails to support most, if not all, of their body weight8. This allows them access to a more diverse array of hard to reach foods in the canopy, often on thin branches at the edges of trees8. In addition, spider monkeys use their prehensile tails for rapid, arm swinging locomotion below branches9 (commonly called ‘brachiation’). In this movement, their tail acts as a propulsive lever and a stable grip, allowing them to rapidly arm swing within and between tree crowns and support themselves when bridging perilous canopy gaps10. In contrast, howler monkeys are less athletic when it comes to using their prehensile tails for locomotion, preferring to slowly walk across supports while their tail grips the substrate8, almost like a safety harness. Howlers rarely perform the rapid, below-branch, tail-assisted ‘brachiation’ locomotion that is so common to see in spider monkeys2  (see videos below). 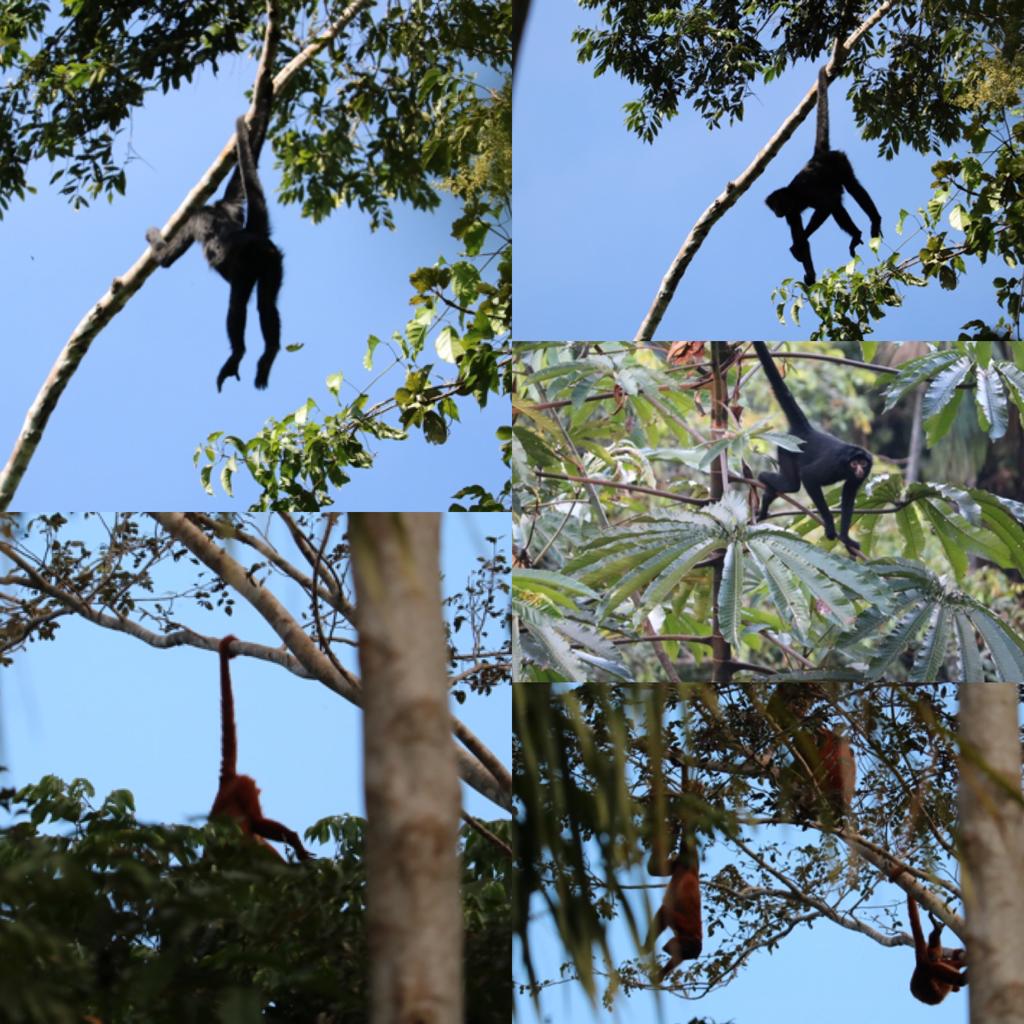 Examples of the diversity of prehensile tail use in atelines (i.e., howler and spider monkeys). Top row: Peruvian spider monkeys (Ateles chamek) using tail assisted and tail-only foraging postures. The tail of spider monkeys makes up a larger portion of the body weight and is more muscular than the capuchin tail, and capuchins rarely perform ‘tail-only’ foraging postures. Bottom row: Bolivian howler monkeys (Alouatta sara) in the Peruvian Amazon using their prehensile tails to hold up their bodies while foraging. Howler monkeys do not usually use their tails for suspensory locomotion, like spider monkeys, instead preferring to travel on the tops of branches like non-prehensile tailed monkeys. Middle Right: A Peruvian spider monkey using tail-assisted, below-branch ‘brachiation’, a behavior not seen in either howler or capuchin monkeys. Top Row Photos by L. Fannin. Rest by C. Rohr.

Similar to howlers, capuchins use their prehensile tails more for support during foraging, rather than for locomotion11. This includes below-branch foraging, although it is more common to see capuchins use their tails in combination with support from both of their hindlimbs11. Unlike spider or howler monkeys, capuchins rarely support their body weight entirely with their tails. Uniquely, capuchins use their tail as anchors during extractive foraging, where both hands are freed to forcibly manipulate and twist food objects12. Capuchins are notoriously famous for this behavior12, and the tail provides much needed leverage while they rip open hives looking for invertebrate prey or plucking palm fruits from wobbly tree branches11. Extractive foraging behaviors with the prehensile tail are not as common in spider or howler monkeys13, suggesting that this unique role for the prehensile tail may be adaptively significant to the capuchin11. 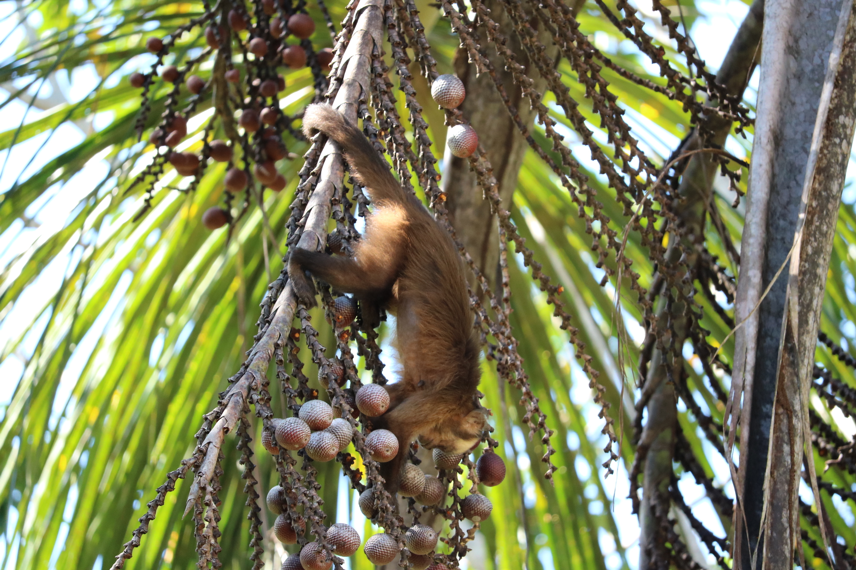 A tufted capuchin monkey (Sapajus macrocephalus) using its prehensile tail in below-branch feeding on palm fruits in the Peruvian Amazon. Unlike the tail assisted, below-branch feeding postures of spider or howler monkeys, capuchins rarely suspend themselves solely by their tail, instead preferring to hang with both their legs and tail for support. Tail-assisted suspension opens their hands up for extractive foraging, such as pulling palm fruits off of fronds. Photo by C. Rohr. 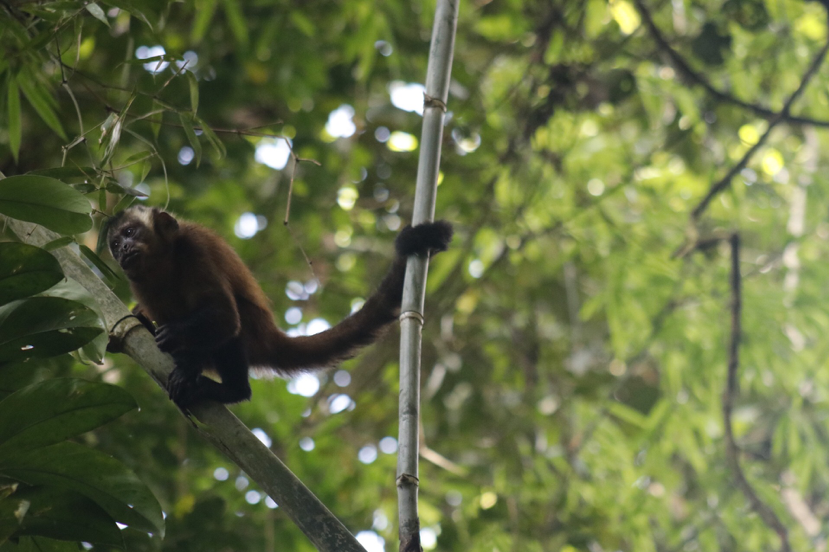 A tufted capuchin monkey (Sapajus macrocephalus) grasping a bamboo pole with its prehensile tail. Unlike the prehensile tails of both spider and howler monkeys, the capuchin prehensile tail is completely covered in hair and lacks a friction pad, indicative of a separate and independent evolutionary origin. Photo by C. Rohr.

Overall, the prehensile tails of these monkeys share key functional roles, even with very different anatomies. Both groups use their tails to increase their ability to access food in the most unstable parts of the canopy. Though the prehensile tails of howler monkeys are similar in appearance to spider monkeys, due to their close relatedness, they use their tails much more conservatively, likely because their low-energy, foliage-based diets prevent such elaborate movement8. By comparison, spider monkeys use their tail in acrobatic, below-branch moving, hence the greater elaboration of their neural and tactile abilities5. They can fuel this taxing locomotor behavior with high-energy ripe fruits, which make up a substantial portion of their diets10. While capuchin tails may not share the elaborate adaptations relative to spider or howlers, they are nonetheless critical for manipulating difficult to reach food items. The reductions in strength and manual dexterity in the capuchin tail are reflected in its minimal use during locomotion, as well as the low frequency of ‘tail-only’ suspensory behaviors. Key ecological differences between capuchins and spider monkeys (and by lesser extent, howlers) suggest that each monkey group evolved its prehensile tail in response to a unique set of ecological selective pressures. So, while there are quite a few ways to skin a cat, as the old saying goes, the ways to use a prehensile tail in primates may undoubtably be a close second.

Luke Fannin is a PhD student at Dartmouth College and FPI alumni interested in functional primate morphology, where he uses living primates as models to interpret the dietary and locomotor behavior of fossil primates, including fossil hominins. He has done work with living primate in the jungles of Peru and Cöte d’Ivorie and has performed paleontological fieldwork in Tanzania. He has been a science staff writer at FPI for almost three years.

Like Loading...
Oct 14miniComments Disabled
← Trophies, Trump, and the Sound of Silence
→ Snakes: Food or Foe for Monkeys?