This Monkey Has More Followers Than You 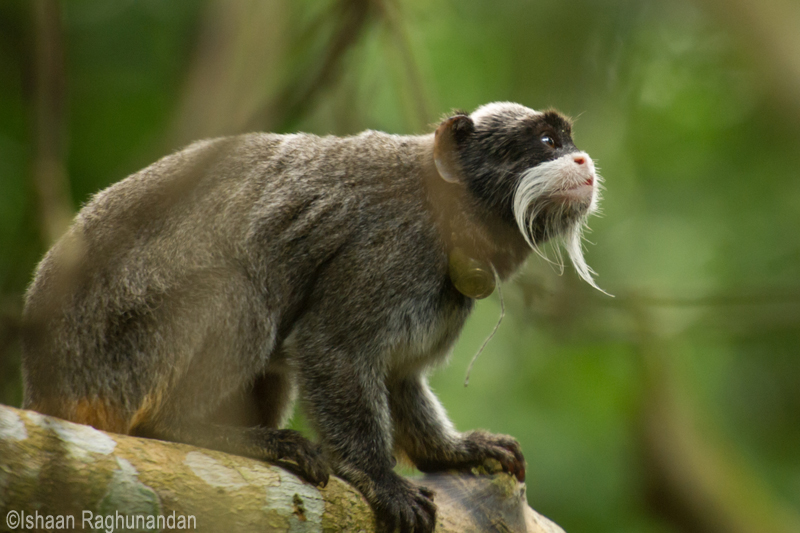 In a culture endlessly seeking likes, loves, and comments, it may come as a shock to many that a tiny, grizzled tamarin in the remote Amazon has most of us beat. To be sure, she doesn’t have any social media accounts, and she has never shared a selfie or tweeted about her breakfast, but she does have something that every would-be microcelebrity yearns for: an army of devoted and admiring followers.

As an emperor tamarin we’ve studied since 2011, GRC’s popularity stems not only from the fact that her group’s home range overlaps with our field station, but also from her admirable qualities as a stalwart leader. She is large, muscular and tough, having raised at least 5 infants despite having a massive hernia. As the dominant breeding female (DBF) in her troop, she confidently leads them on their daily operations, foraging for insects and fruit (once even spotted devouring a live snake!), then napping it off in the dense vines high in the canopy.

GRC’s reign has been long, making her the oldest DBF that we are aware of. Her body has many battle scars attesting to the toll that jungle life can take, as well as to her strength and resolve in maintaining her position. We’ll never know of the details of all her brawls and adventures – fighting competitors and predators alike — but it is safe to say this scrappy little monkey has some stories to tell.

However, GRC is not just a formidable alpha female, but one with a nurturing and compassionate side to her personality. Field team leader, Gene Estrada, describes a recent incident where a very large raptor swooped beneath the canopy in hopes of nabbing a tamarin for lunch. Though a failed attempt, Gene reports that the group spent the next 20 minutes or so “vocalizing loudly in a very distressed manner […] with various members spread out and scanning frantically in all directions.” This culminated in a grooming session in a secluded patch of low trees and bamboo, which lasted more than two hours as the group recovered from the near-death experience. During that time, GRC focused her attention primarily on her daughter, GPG, who was characteristically more agitated than the others. Witnessing such intimate behavior, as a dauntless mother calmly reassured her distressed daughter, further cemented this monkey’s legacy as true and admirable leader.

Typically only one female in a tamarin group breeds, and none of the males ever know who actually sired the infants, so they all stick around to cooperatively raise them. GRC pushes this arrangement to the limit, however, with her routine ability to string along 3 to 4 paramours while also managing to keep them from bickering.

Despite being a bit of a roughneck, GRC also exhibits unusual grace. Most notably, she allowed her 3 year-old daughter to remain in her natal group. Non-dominant tamarin females can be reproductively suppressed by the DBF in the group, both by behavioral and olfactory mechanisms, which means that their normal estrous cycles can become disrupted. Sometimes they won’t even ovulate. At other times, males seem completely uninterested in them even if they are ovulating. Normally, this situation might force a suppressed daughter to disperse to another group, but instead, high-minded tolerance prevailed – GRC permitted her to stay in the group of her birth, safe from the many dangers that face dispersing females.

According to research published in the journal Royal Society Open Science this year, the typical Facebook user has about 150 friends, while Statista reports in 2015 the average U.S. teen on Instagram had 150 followers. Field Projects International (FPI) has easily had over 200 researchers and field course students who have spent at least a few minutes following and observing GRC with a keen interest far exceeding that of a bored accountant scrolling his newsfeed during a bathroom break. So in terms of quantity and quality of engagement, the tamarin is winning. And it gets better…

While the casual observations of FPI’s monkey loving community certainly add up, many other people also visit this field station and have an equal curiosity about these mustachioed primates. Furthermore, among FPI field students, a great many will learn to track, follow, and sample behaviors from primates in the rainforest by practicing on GRC’s group. Indeed, the G in her name refers to her group’s identifying color (green), and the RC refers to the fact that she is the one in the group with a radio collar. This allows researchers and students to find, identify, and follow her troop to collect copious amounts of scientific data. This includes many FPI team members over the years who have spent entire days — often many in a row over periods of weeks — following GRC and her group. Even the BBC visited us in 2013 to follow them while filming the Monkey Planet series, exponentially expanding GRC’s global fame.

The Price of Fame

Ask anyone who has a devoted following what it is like, and they will say it is a blessing and a burden. For GRC, it is no different. Researchers are like paparazzi, always watching and reporting on your every move. Our Disease Ecology teams go as far as to collect the feces dropped by GRC and other primates in the community. Privacy is the price of fame, but she takes this in stride. Like human primates in Hollywood, she has become habituated to this attention.

GRC’s patience has paid off with ample data collected over the years. Each year during our mark-recapture program, we are able to give her a full veterinary health inspection, monitoring for injuries, disease, and senescence, as well as acquiring hormone profiles. Since everyone in her group and 12 others are individually identifiable, changes can be tracked over time and in relation to each other. This combined with many, many hours of behavioral observation and GPS tracking have taught us about tamarin forage strategies, sensory perception, reproductive biology, social structure, vocal communication, dispersal, scent marking, and home range utilization.

The tenure of a DBF can end suddenly, and without Social Security checks or Florida bungalows to ease the burden of old age. None of us like to think of the day that we no longer see GRC bounding through the branches, usurped by a PYT and/or abandoned by her males. In fact, it is almost unimaginable. When the field team this summer made a birthday card for researcher Matt de Vries, fellow researcher Effie Robakis scribbled below GRC’s image a caption that simply read: “I’ll outlive you.”

So, we fully expect to see her again with every visit to the Los Amigos Biological Station. Even amid the incredible primate diversity at this field site, GRC stands out as a singular personality… and in every way, an example worth following. ¶