For researchers and students returning from the field, there is often a short period of readjustment to “normal” life. Many of us swap the actual jungle for the concrete jungle, which upon return can seem infinitely stranger and even more overwhelming. You really start to see the resumption of a “civilized” lifestyle in a new light, whether it be your reflections on the sheer energy and resources used to fuel our “First World” fervor, or recalibrating yourself to a pace of life that is no longer simple and straightforward in its demands to “go forth and follow monkeys… grab their poop, if you can.”

Deeper issues aside, it is often the little things that stick out. For me, it was taking my first few showers at home. Never will you comprehend the absolute luxury of your household shower so clearly as when you’ve returned from a couple months in the Peruvian Amazon. I immediately felt guilty whenever I savored more than 30 seconds under anything that wasn’t an ice cold trickle, but damned if hot, pressurized water isn’t one of the greatest sensations on earth. I firmly believe that Caligula, with all of his hedonistic excesses, probably enjoyed a simple, warm shower more than any of his other depraved indulgences.

Note to self: Don’t be Caligula.

While I continue to struggle with my ascetic ambitions, I should also mention some of the luxuries that living in the rainforest provides. For instance, I found that trading the vesperal chorus of frogs during the gloaming hours before bed for the urban din of cars and sirens to be a fool’s bargain. Likewise, waking up to the morning duets of titi monkeys outside my window is orders of magnitude superior to any ringtone you can download. Most of us leaving the field definitely miss these things and so much more, but being in the field also trains you to be more attuned to your surroundings when you return to the city. So many times I’ve noticed a new bird or appreciated a beautiful tree that the old me might have taken for granted as he rushed from point A to point B, perceiving only the functional elements of my immediate environment. 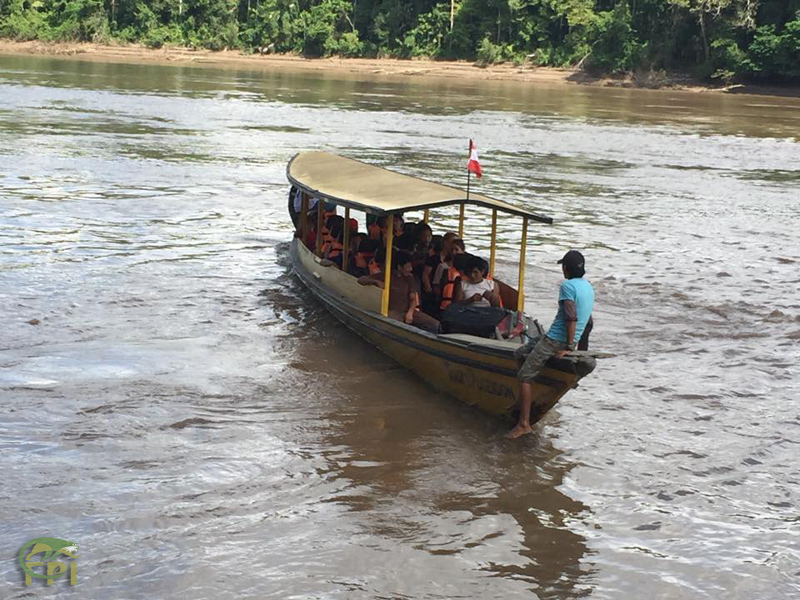 While there’s little doubt that Jungle Zen can renew your sense of wonder from thousands of miles away, we thought it would be also fun to list some the odd behaviors and weird worries that are no longer adaptive outside of the rainforest environment. Luckily, many of our past and present team members were happy to reveal the jarring experiences they had while resuming lives far away from the Peruvian Amazon:

1. Mini Erkenswick Watsa confided her fear of clogging toilets, “because you are supposed to put the T.P. in them now,” a cultural norm she had come to regard not just suspiciously, but as “weird and terrifying.” This is an experience most travelers around the globe can probably relate to, since much of the world doesn’t have plumbing intended to handle massive gobs of toilet paper. It always feels so wrong – even decadent – to pitch your paper into the bowl when you return to the States… all the while nervously sweating over your first flush, praying, just praying, the water doesn’t rise up over the rim.

2. Sometimes it isn’t home that seems odd as much as it is you who feels like the oddball. Many of us bring back weird habits from the field that probably confuse normal folks, a phenomenon perfectly captured by Cathy McDonough when she confided her fear of “getting caught watching animals poop.” With careful scrutiny of her words, we realize the key is not actually to avoid watching animals poop, but rather to just not get caught in the act of watching. As a biologist, you’ve likely been irredeemably corrupted by your time spent collecting fecal samples, but with careful training you can learn to feign disgust while still congratulating defecating critters on the sly. 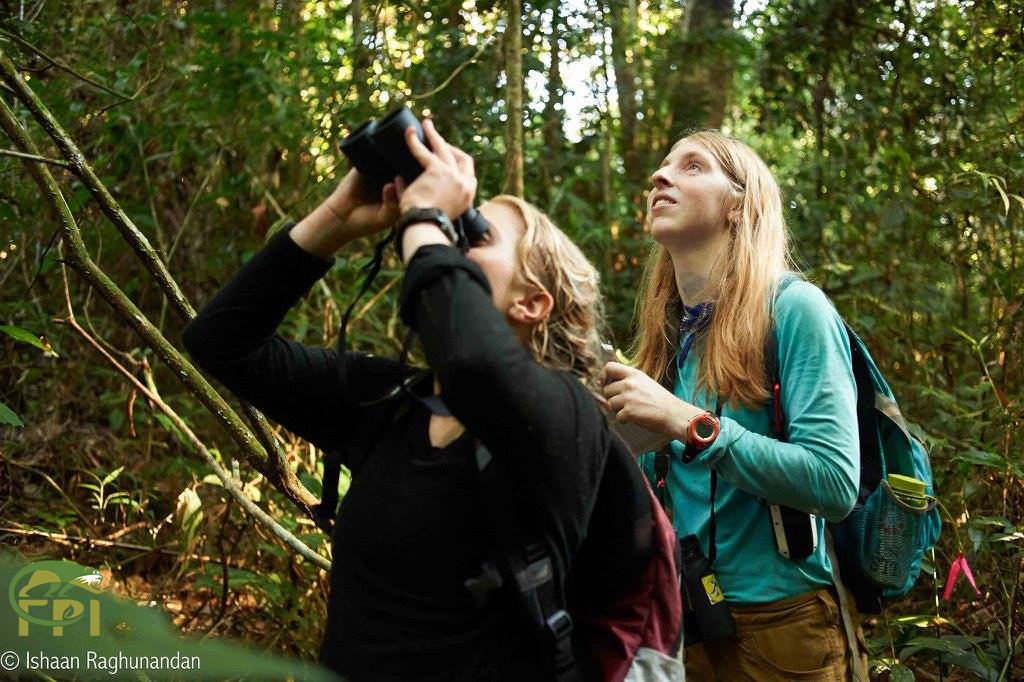 3. While on the topic of bathroom habits, even after a full five years spent out of the field, former RA Emma Wallace reports: “every time I need to go for a pee, I still feel it is appropriate to just go behind the nearest bush.” It is hard to overstate the comfort and convenience of never having to hold it, which compensates in large measure for the extra vigilance necessary to protect your exposed sensitive bits from hordes mosquitoes absolutely delighted to see them. Also, be aware that another field biologist may be lurking somewhere in the bushes with a notebook, hoping for a good sample.

4. Samantha López remembers waiting at baggage claim in Mexico City on her way home, wondering if her friends were still in line at customs. She instinctively reached for her chest to grab her binoculars and get a better look, but of course they had long been stowed away in her luggage. “People stared at the weird kid with invisible binoculars,” she recalls, adding that she had even raised her empty hands up to her eyes. Luckily, the use of phantom equipment fades with time, however, the phantom beeps of telemetry units still torture my ears whenever I search haplessly for car keys.

5. Perhaps the single-most common readjustment back to normal life is this one, perfectly explained by our research collaborator and field course instructor Effie Robakis: “Re-learning that every random tickle is not actually a bug using you as a highway/perch/dinner.” In the field you become quite accustomed to slapping mosquitoes, brushing away insects, and maintaining vigilance against dreaded bullet ants and other stinging hymenopterans. However, over-reacting to every micro-sensation on your skin while back home makes you appear almost as insane as a person who, say… habitually uses invisible binoculars. 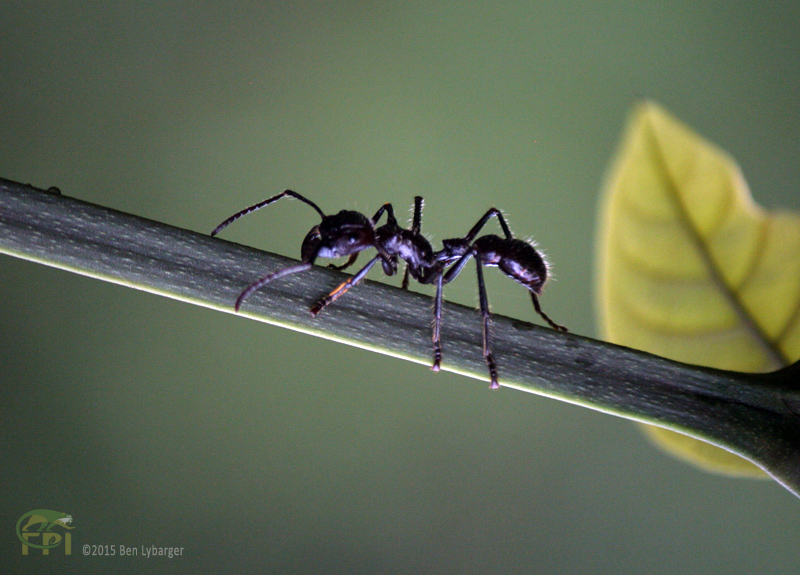 Regarding insect paranoia, our project coordinator, Frances Humes, extends her field of concern beyond somatosensory feedback. “Whenever I reach for something outside, I have a moment of hesitation wondering if a bullet ant is on the other side,” she confides, a condition which can last for a couple weeks. Most of us can relate to this feeling, especially if, like research assistant Mandy Murti, you’ve seen bullet ants in the showers at the field station more than once. On the other hand, if you are like Mini and have never been stung despite 6 years of field work, your sigh of relief back home is tinged with an element of regret. Only a biologist would feel shame for not being envenomated by an infamously wicked ovipositor.

For my money, though, Anne-Marie Plante’s fear of getting chiggers in her underwear trumps all other fears. As someone who has had more than his share of chigger bites, I think I’d rather go through Sateré-Mawé initiation rites than ever host a chigger party in my pants.

6. While brief and unpleasant showers are not the most fun things in the world, washing your laundry in buckets and trying to dry it in the sun during the rainy season can be a real pain in the ass. Even if you muster the wherewithal to scrub your stinky shirts and socks, you can never quite get that springtime flower scent. At best, you get a sweaty bouquet of rancid fruit and armpit candy. Eventually, as research assistant Martha Bawn points out, you forget what clean clothes are supposed to smell like. The fear of “relying on jungle standards of clean” is all too real a phenomenon. It takes some time for your nose to recalibrate itself to the sterile, perfumed topography of urban life. In the meantime, you are left to worry that you are making other peoples’ eyes water without realizing it.

Even once your nose resumes its hyper-vigilance against offensive human odors, you can still have troubles. Mini was stupefied for three days upon her last return from the field, trying to locate the source of a “terrible, rotting, sweaty, godawful smell” that seemed to follow her even after hot showers and wardrobe changes, making her suspect those who were (literally) closest to her. When finally she solved the mystery, it was her watch strap! She could only detect it once the rest of her stopped being “equally or more smelly.”

7. Culinary expectations also change. Unless you are a cheapskate eating machine with an undiscerning, capsaicin-damaged palate like mine, you probably are going to have far fewer improvised food combinations once you go home. Chalina Seligson makes this point perfectly salient by asserting how “freaked out” she’d be if she ever got “another hard-boiled egg baked into [her] lasagna/spaghetti casserole!”

8. While the pace of life is increased in the city, the pace of walking is anything but. Kaelyn Dobson explains: “I had difficulty slowing down my walk after doing all those troop follows. I would unintentionally just leave my friends behind in the dust as we walked across campus. They now call it my ‘monkey walk’.” In a more perfect world, we’d all have our own monkey walks (as well as our own monkey troops to lead the way).

9. Having grown accustomed to speaking Spanish, it can be tough to adjust your linguistic approach back home. With that in mind, a fear “of being called a jack ass for speaking Spanish to someone that looks like they are from South America” is something Gideon Erkenswick Watsa lives with every day. We thought about starting a foundation to help fund research into treatments for this affliction. Even when he is right about someone’s continent of origin, if the person hails from Brazil, Suriname, Guyana, or French Guiana – or speaks an indigenous language like Quechua or Aymara – Gideon very well could come off like a jack ass. Besides, I think it is far more fun to speak Spanish to people who look like they are from rural Ohio. They love it!

10. The winner for longest-lingering and most disturbing after-effect of field work goes to our 2010 RA Mary Dinsmore, who held onto her fear “of passing 8 inch nematodes 1.5 years after leaving the field” Her frustrating experience with getting the appropriate medicine here in the U.S. due to medical and governmental bureaucracy could possibly have been even more dispiriting than the roundworms themselves. Here’s hoping no one else comes home to anything worse than a guilty shower and the urge to pee on shrubberies.