Photographer Ishaan Raghunandan (Ghappu) is spending a good chunk of his summer in the field, pushing the boundaries of his camera, his endurance for insect bites, and occasionally even his own fears. Many times getting an amazing shot requires patience, quick thinking, and/or experimentation; but even then, there are no guarantees. In this guest blog, Ishaan paints a picture of what it’s like to ply your creativity deep in the Amazon. – Ben Lybarger 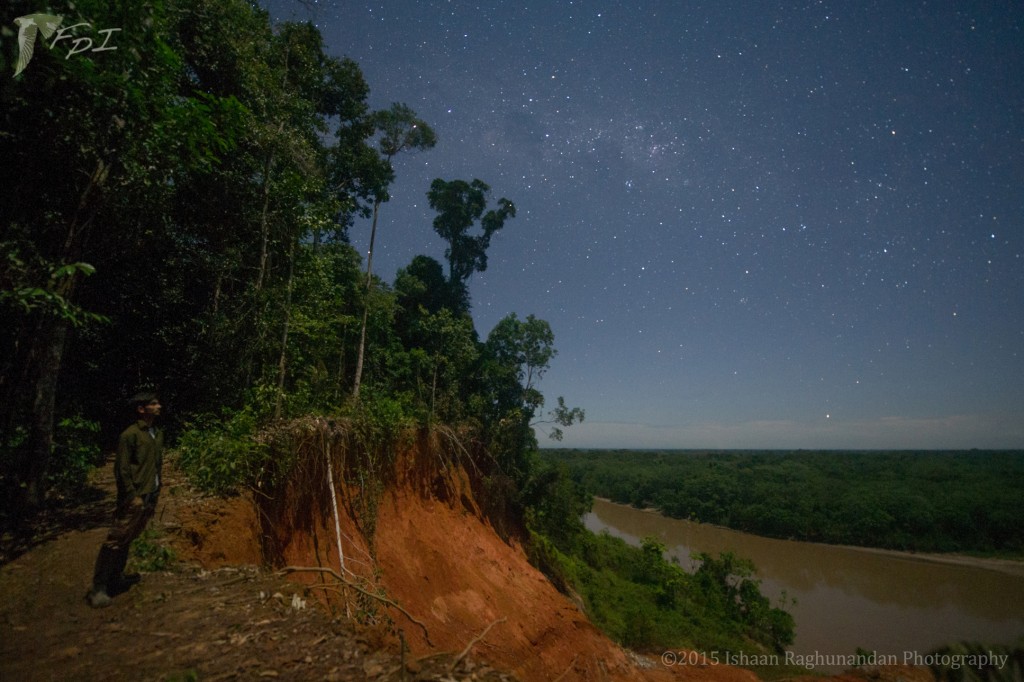 It’s close to full moon. I’ve been waiting for it for weeks before I came here to the Los Amigos Biological Station (aka CICRA). I plan to spend the next few days — or should I say nights — photographing the stars and the environment of the surrounding forests in moonlight. A lot of moonlight doesn’t make for good, long-exposure photographs of the stars, but if I must be alone in the forest for long periods of time at night without the ability to use my head lamp (because I risk ruining the photograph), I’d prefer it to be as bright as it can be.

I tell Gideon of my plan to go down to the banks of the Madre de Dios river, and he says it is totally fine.

“Are there caiman down there, Gid?” I ask. Multiple visions of TV shows and YouTube videos showing people getting killed by gators and crocodiles play in my mind. The story of a researcher vanishing in a cocha (oxbow lake) also sticks out, along with the phrase: “probably was a caiman that took him.”

“That’s not a real problem,” says Gid. I know he’s right. TV hypes up everything. Fear sells. Maybe that’s why so many of us feel alienated in the outdoors, and forget that the soil is where we came from.

I take a few test shots that last less than 10 seconds when I hear splashing on the other bank. The sound of the shutter closing rings through the night, and I turn my headlamp on immediately to scan the bank I am on. About 20 feet away I see eye-shine. Red. Adrenaline.

Night jars are all over the place here. But I’m not able to take my headlamp off the shining eyes. A boat passes while I keep my own eyes fixated on those eyes. No movement. Strange. That’s not bird behavior; they look around for insects. Could be a snake.

The boat goes out of sight as the waves it created start to hit the shore. When the waves reach the eye shine I see them vanish and reappear with each trough and crest. Now the adrenaline is really flowing through my veins. I laugh nervously to myself.

I know I’m being stupid. That caiman wants nothing to do with me. Yet in my imagination the bank I’m on is now crawling with caiman trying to drag me into the river.

Stop it! Why are you spooking yourself!  I look down at my settings and calculate the aperture and ISO for a long-exposure photograph while continuously looking back at the eye shine up the river. It’s going to take 32 minutes. I set up the camera and leave. There is no way I will be able to stand on the bank in the dark for that long. I have now spooked myself into a nervous frenzy.

I take the stairs back up to camp. Oh it feels so good to give into the flight reaction of the adrenaline. Gideon, Francis, and Effie are in the lab when I enter, sweat pouring down my temples. I almost yell at them: “There are caiman down there!!”

They shrug. “Yeah, probably.” It takes them a while to realize that I am clearly scared. Effie sits me down and tries to use logic to explain to me that the caiman really doesn’t want to eat me. Francis interjects (she’s a realist): “Wasn’t there a researcher that got killed by one a few years ago?”

“Yeah, but he was in the water,” says Effie.

“Well, I’m pretty close to the water!” I snap back.

“Hey man, if you’re not comfortable, don’t do it… Anyways, you are up here now.”

“Yeah, it’s a long exposure. Which is why I can’t even use my headlamp for the duration that the camera’s shutter is open.”

Gideon has now finished talking to the health team about tomorrow’s plan and he sits down to become part of the circle. I turn to him, decide to throw my ego out the window and ask: “Will you come down with me when I go to end the photograph?”

Effie cannot contain herself anymore. She bursts into a giggle. “Awww… Will you come down with me Giddy?” she drawls.

That’s it! My ego resurrects itself in less than a second! I’m out of the chair and through the door! (Talk about being easy to manipulate!)

I am a human being, I think to myself as I trot down the 250 stairs. The biggest, baddest killer on this planet. The organism that has threatened all sorts of species till extinction! I turn my headlamp off at the bottom of the stairs and get my eyes used to the moonlight.

When I reach the bank I scan the area around my camera. Nothing. I walk down and wait for my timer to tell me when to end the photograph. Click. The shutter closes and my headlamp is on immediately.

The eyes are still there.

I put the lens cap on the camera and then take a few steps towards the eyes. I am determined to get over this irrational fear. I pick up a clump of mud, take aim, and slowly ( I don’t want to hurt the caiman either) lob it in the direction of the eyes. The moment the clump hit the water the eyes disappeared. It takes a few seconds before they reappear a little further away from the bank. I smile to myself and think about how I probably troubled the caiman a lot more than it troubled me. That poor caiman was probably a lot more scared of me, than I was of it.

I turn around and look at the sky above the river. Clouds. I know my picture is not going to be how I envisioned it. It doesn’t matter. I had a bigger lesson to learn to tonight.

I pick up my camera and take the 250 stairs back to camp. 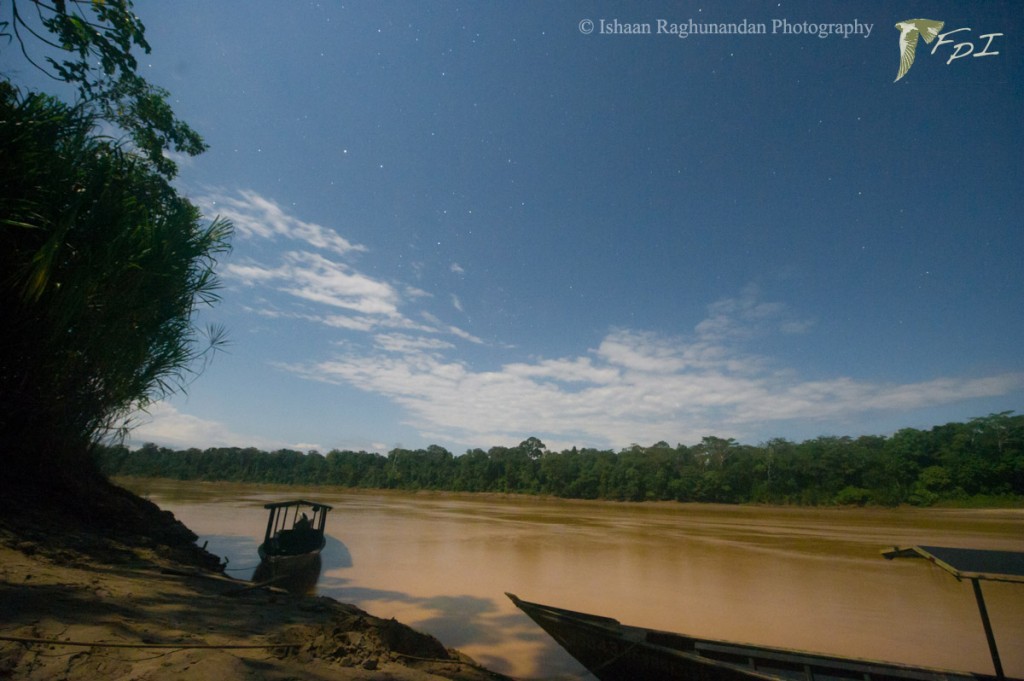