Tropical Asia is one of the most important biodiversity hotspots in the world, and yet, it is one of the most vulnerable to climate change and sea level increases. The region is home to a large  number of threatened and endemic species, making it critical to integrate assessment and planning for effective conservation in the context of climate change.

Located in a low-lying coastal region in Asia, Bangladesh lies in the transitional point between the Indo-Himalaya and Indo-Chinese sub-regions of the Orient. Within 147,570 square kilometers, it boasts a number of diverse ecosystems and an associated richness of unique plants and animals.

The Sundarbans is the world’s largest contiguous mangrove forest (over 10,000 square kilometers in size) and it is shared between Bangladesh and India. It is also the world’s only mangrove forest with tigers. It represents the largest remaining Bengal tiger (Panthera tigris tigris) habitat, and is home to ~ 750 animals. Other fauna include the spotted deer (Axis axis), estuarine crocodile (Crocodylus porosus), rhesus macaque (Macaca mulatta), king cobra (Ophiophagus hannah), leopard cat (Prionailurus bengalensis), wild boar (Sus scrofa), fishing cat (Prionailurus viverrinus), Indian python (Python molurus), and over 275 bird species. This mangrove forest is a UNESCO-declared world heritage site and is ratified by the Ramsar Convention on Wetlands.

Lawachara National Park is best known for its faunal diversity. It spans over 12 square kilometers and is categorized as semi-evergreen forest. The park is home to 6 primate species, including the lesser ape, the Endangered western hoolock gibbon (Hoolock hoolock). Lawachara also boasts a large variety of herpetofauna and avifauna with several new species for Bangladesh having been reported recently, some by the course instructor himself.

Stay in Lawachara
There are a number of private guest houses just outside of Lawachara National Park that are suitable for field course groups. All of them provide clean, modern rooms, washrooms, and meal services. Generally, 2 to 3 persons will share a room. Due to varying group sizes and availability, you will receive information of the precise guest house that will be used approximately one month prior to the start of the course.
Stay in the Sundarbans 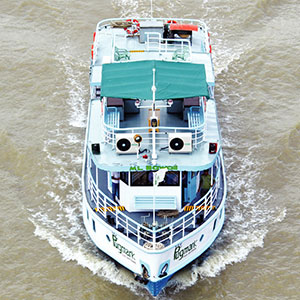 Lodging during our time in the Sundarbans will take place on a houseboat. The boats accommodate groups that are small to moderate in size. Each boat has several rooms with bunk beds, a dining room, a lounge, washrooms, coffee bar, and plenty of deck space for viewing plant and animal life. An example of the type of boat used is provided on the right.

All boats have modern safety devices, lifebuoys, lifejackets, fire extinguishers, radio communication, GPS, and depth sounders. To enter the Sundarbans boat operators have to acquire permission from the forest department and 2 rangers travel on-board for the entire period that we are inside the forest. An additional motorboat also accompanies the main vessel and can be used in case of an emergency to ferry someone back to the main port quickly and safely to access emergency services.

Traditional Bangladeshi meals will be available throughout the course, freshly cooked with fresh ingredients. The exact menu will vary depending on availability at the various course sites. Some examples of meals are listed below:

Meals in the Sundarbans are very special, all of them being cooked on the moving boat. Freshly caught Sundarbans fish and shrimp will be offered during this leg of the course.

Traveling To and Around Bangladesh