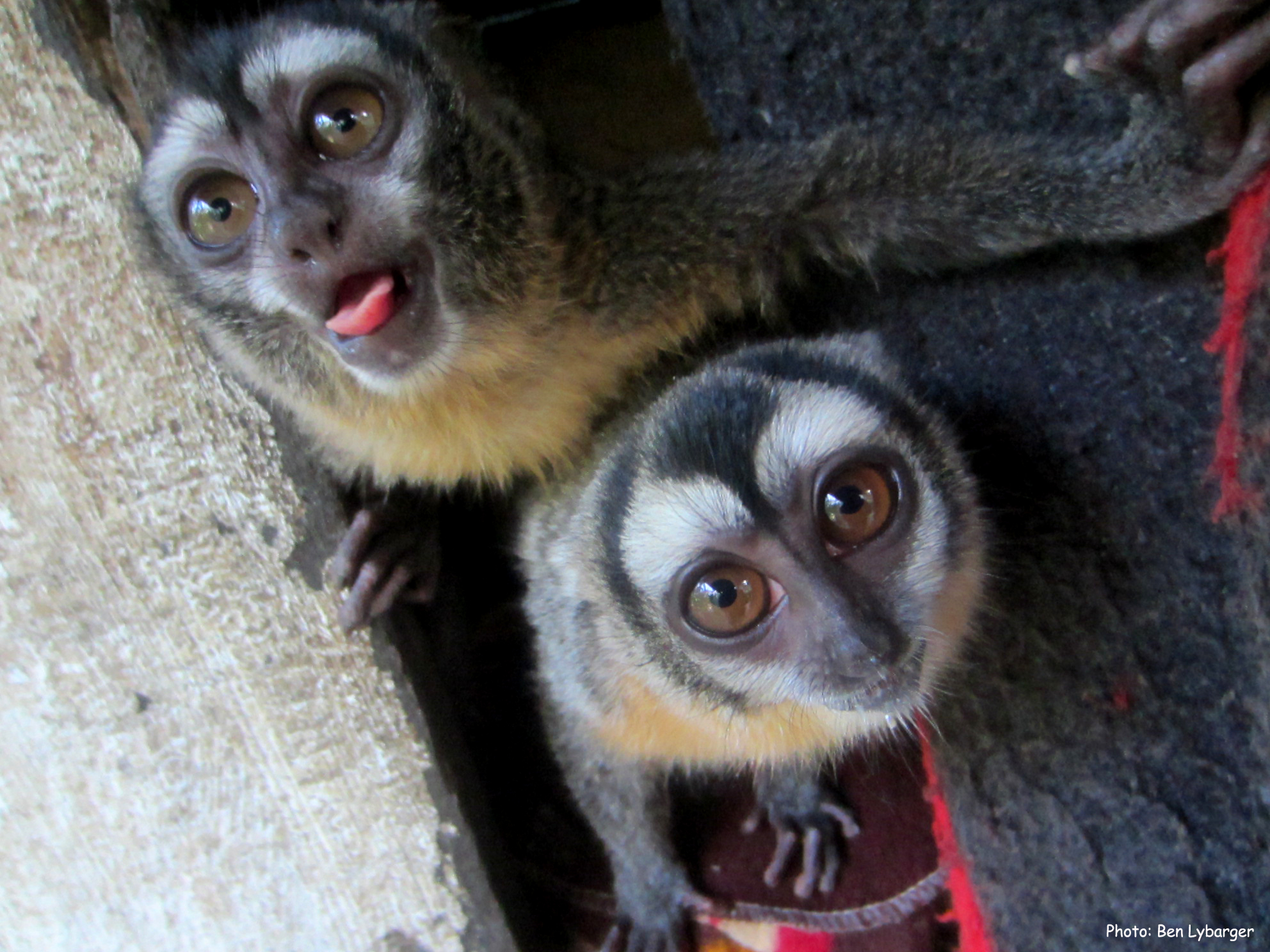 Lurking in the shadows, plucking moths from the air and scarfing them down with no remorse, this stealthy simian owns the night. No other nocturnal primate inhabits the Americas, apparently all of them lacking the bravery needed to cavort in the moonlight while jaguars and pumas prowl the forest below. Undaunted, night monkeys welcome the darkness… and some say it resides within them as well.

However, most people say no such thing, and it won’t be easy to convince them otherwise. There are at least eleven types of night monkey distributed widely across Central and South America, but you will not find a single one of them starring in a Stephen King novel or haunting the dreams of terrified toddlers. First off, they are quite small: just 1 to 3 pounds, depending on the species. That’s less heft than a gas station Big Gulp, and nowhere near as hazardous to your health. 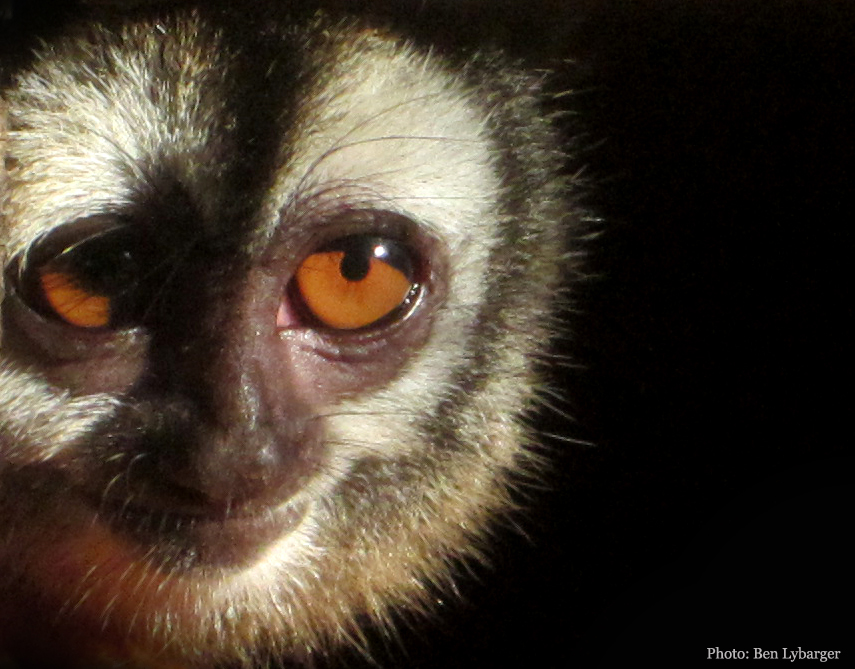 Furthermore, consider that they are a rarity among primates for being socially monogamous and sexually reserved, never making tabloid headlines like their famously randy bonobo cousins. Pairing for life and showing stress when separated from their partners, while wholesome and romantic, certainly diminishes the night monkey’s casting potential as bone-chilling monsters. In fact, night monkey males are the primary caregivers for their offspring, making Father’s Day a major driver of the Aotus economy, and a major reason why night monkey females rarely make Ashley Madison accounts.

Nevertheless, there are still signs of hope for a Night of the Night Monkey horror franchise. If you’ll recall, The Predator had excellent night vision as it hunted and killed its human prey. So do night monkeys as they stalk and devour their main quarry: tree fruits and nectars. However, their adaptations to low-light conditions are quite different. The Predator’s vision is characterized by sensitivity to the infrared portion of the electromagnetic spectrum, while night monkeys evolved large spherical eyeballs with more rods and fewer cones. An unfortunately side effect of this adaptation is a pernicious cuteness, along with greatly diminished color vision. So as you might imagine, an Alien Versus Aotus project is unlikely to attract any big name producers. 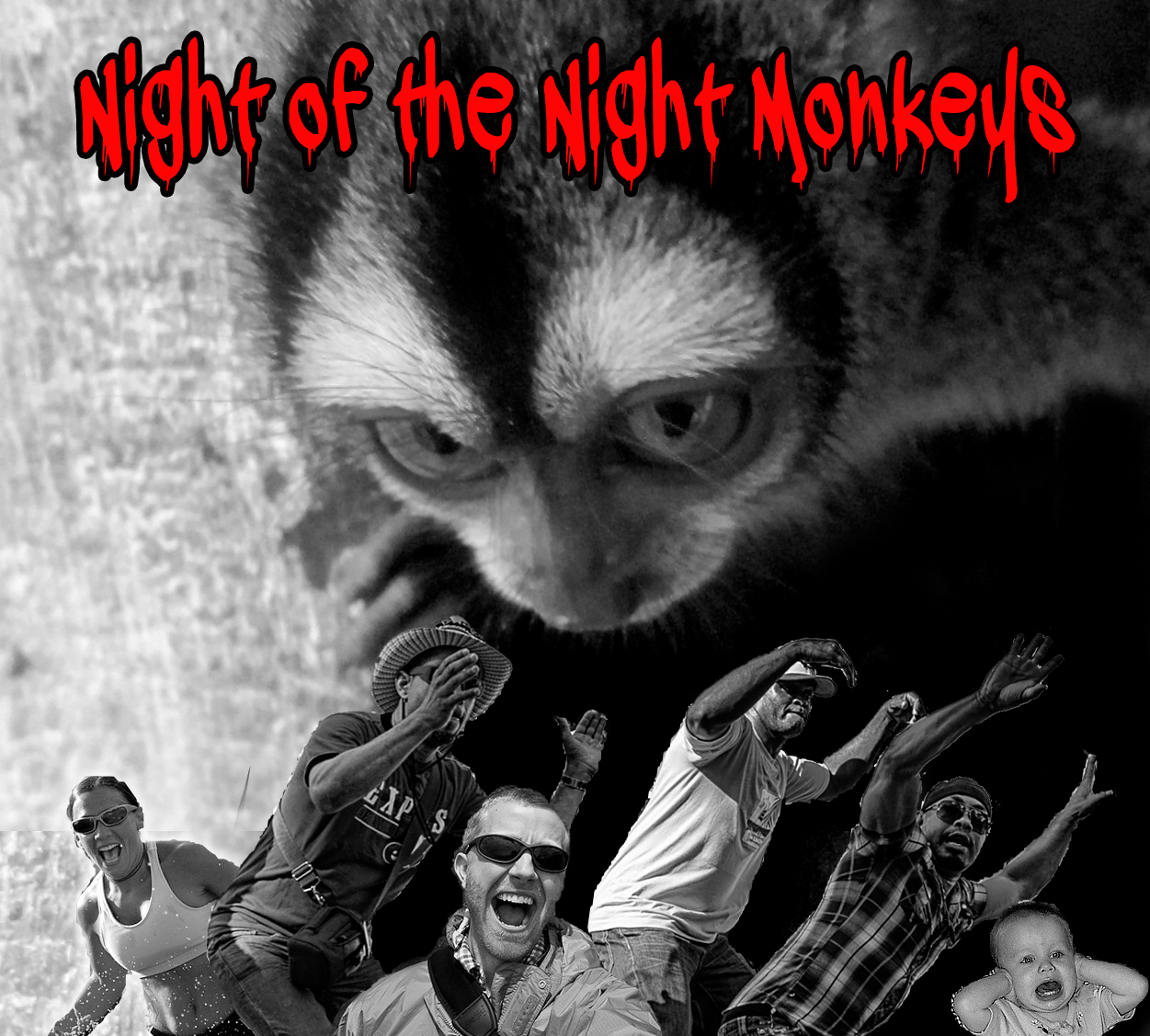 I looked to other horror movie villains for inspiration as well. The nocturnal aspect seemed a good fit for a Dracula adaptation, since they sleep the day away in dark tree hollows or nestled within shadowy brambles, sometimes even sharing these spaces with bats. However, the well-documented cathemeral activities of Aotus azarae spoils the whole allergic-to-sunlight folklore critical for vampire flicks. This species of night monkey has garnered a lot of press by being active in short spurts during both daylight and nighttime hours. With such outliers  tainting the purely nocturnal reputation of the genus, there have been rumors of an industry-wide blacklisting of night monkeys for vampire gigs.

I picture them stalking clueless hikers from above then dropping down onto their heads, hangry for a bite of that sweet, sweet brain nougat.

With dashed hopes of seeing bloodsucking monkeys, my thoughts turned instead to the current cultural fascination with everything zombie. Certainly we can wedge a brain-munching night monkey into a Romero-type vehicle (after all, Romero himself had a penchant for casting monkeys). They are known for being slow-moving cretures, just like the living dead of yore, although they do amble much more dexterously as arboreal quadrapeds. But then you have to factor in how much “nocturnal tree zombie” sounds like the key ingredient of a future cult classic. I picture them stalking clueless hikers from above then dropping down onto their heads, hangry for a bite of that sweet, sweet brain nougat.

Alas, though, these primates are actually capable of incredible leaps in the dark, spanning up to four meters. Such athleticism may work for the new-fangled zombie reboots, but night monkeys are famously disinterested in modernity, as their evolution back into a primitive nocturnality demonstrates. 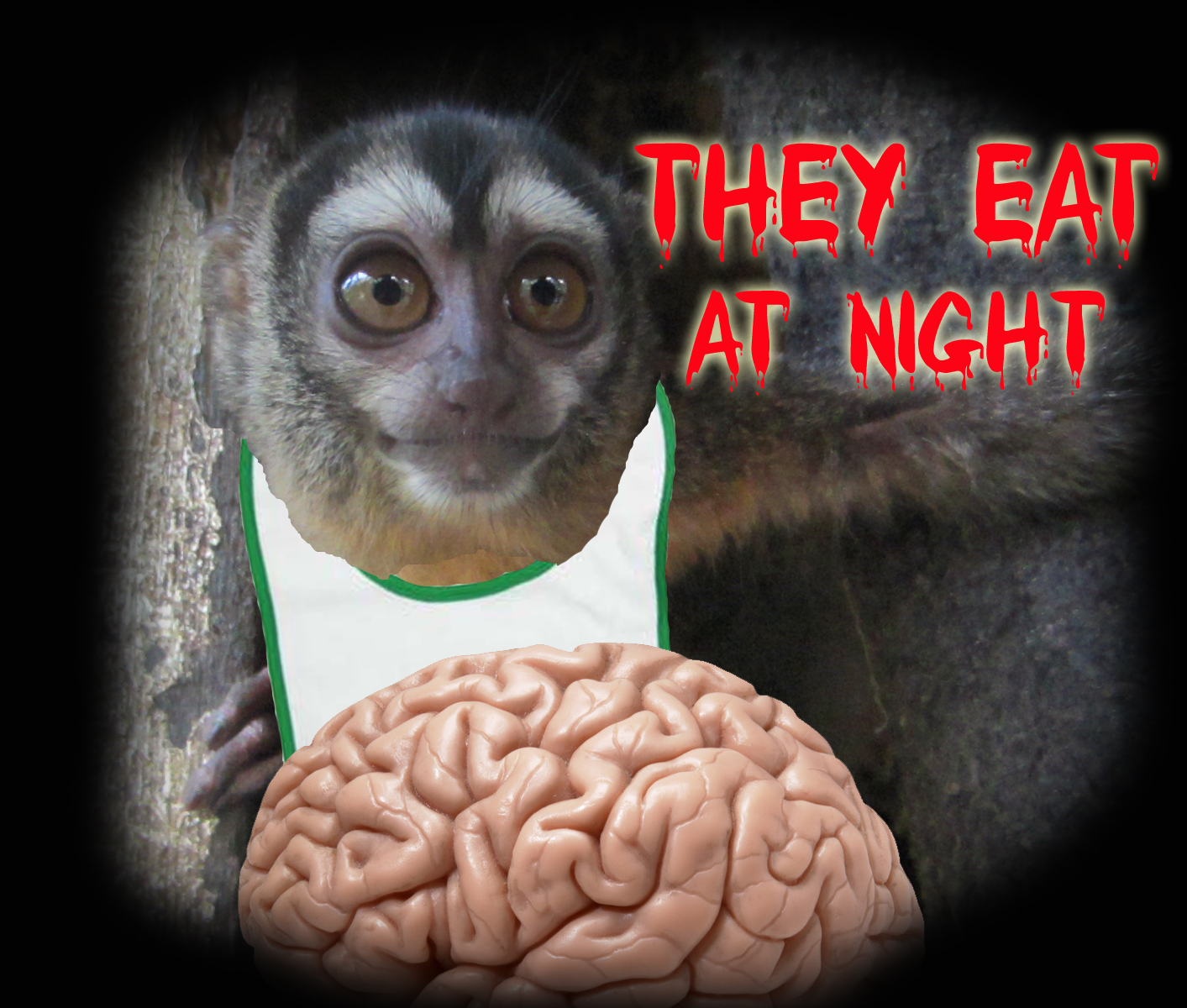 What’s left, you may be wondering, that could possibly render this gentle primate synonymous with terror? The answer may come in the form of a found-footage horror film from 2009: The Fourth Kind. In this alien thriller, owls serve as harbingers of horror, staring creepily into homes from outside the window. This fear is not just something that night monkeys can relate to, since owls are their greatest predator of concern, but night monkeys are actually also known as owl monkeys. They get this moniker not just because they are (mostly) nocturnal, but also because they have a somewhat owl-like appearance, and they even have hooting as part of their vocal repertoire. All signs point to this being the kind of role that they were destined to play. At last, it seems that we’ve found their niche in the Halloween marketplace.

However, there are two problems. First, The Fourth Kind was critically panned for being, among other things, a “dull, clumsy little movie.”  As such, it seems unlikely that the scary owl imagery will be reprised in a series of sequels that owl-impersonating monkeys could audition for. Second, being set in Alaska and filmed in Bulgaria, visiting either location would be quite off-putting to just about every night monkey in the business. Even the mysterious and threatened Andean night monkey (Aotus miconax), who inhabits slightly cooler cloud forests up to 2,400 meters above sea level, is going to follow the typical night monkey path and not veer too far from the balmy comforts of the neotropics.

Some would argue that they do this urine washing behavior because they are especially reliant on olfactory signals for communication and identifying potential mates, but I suspect an equal measure of good, old-fashioned pervy pee stuff.

The only dark secret kept by night monkeys, which could possibly give anyone the the willies is their habit of rubbing urine on their hands and feet to mark branches with their scent. Though not really terrifying, and certainly not completely unique among New World Monkeys, it does make you a bit less inclined to high five one of these stinky chaps.

Some would argue that they do this urine washing behavior because they are especially reliant on olfactory signals for communication and identifying potential mates, but I suspect an equal measure of good, old-fashioned pervy pee stuff. The males are actually known to drink female urine during the sexy season¹, and a night prowling, pee-guzzling primate does have the makings of a truly creepy sort of villain.

In the end, however, it seems that night monkeys actually have more to fear from us than we do from them, keeping their likelihood of inclusion in the pantheon of horror quite slim. Not only do they face threats from habitat loss and hunting, but they also have the misfortune of being the go-to model species used (and sometimes trafficked) to test the efficacy of drugs and vaccines for malaria. Rather than judge them for their aberrant practices, then, perhaps we should instead thank them for the sacrifices they’ve made for human health.

Just don’t thank them with a hearty handshake. ¶