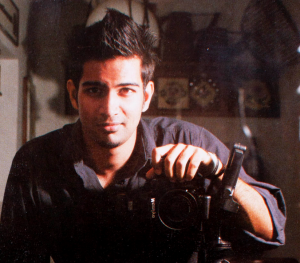 Using the Camera to Create and Capture

An interview with Keshav Sishta by Ben Lybarger

From Indian weddings to high fashion photography, Keshav Sishta has tirelessly plied his trade in countless challenging environments. Whether in the studio with international film stars or piloting a quadcopter over remote landscapes, his command of composition and technique belies his lack of formal training. Despite a handful of short courses and some experience assisting on commercial video and studio shoots, most of his photography skills were self-taught over many years spent doggedly pursuing his passion. During that time, Keshav’s work has continually evolved as his interests shifted from an early love of conceptual photography a la Dave Hill, to the more muted and simpler work of commercial artists like Jamie Chung. Currently residing in Singapore after relocating from India years ago to pursue his studies, his focus has again shifted: this time further into the realm of cinematography under the banner of his company, Blackbird Productions.

Keshav’s versatility, restless talent, and adventurous personality makes him the perfect choice to assist Robin Cox as an instructor for this summer’s Wildlife Cinematography course to be held in the Peruvian Amazon. I wanted to know more about how he got started… far away from the exotic locales and elite clients that now surround him.

I noticed that you used to specialized in Indian wedding photography. It seems like weddings in general are a sort of proving ground for photographers to hone their craft. Would you say this was true for you?

I’ve shot a lot of weddings! It’s the closest to war-time reportage photography you can get – in the comfort of lovely locations over the weekends, of course. Using available light to intelligently sculpt your photos requires so much understanding of light quality and the things that affect it, like reflective surfaces, direction of light, softness of the source, etc. And you have seconds to make certain decisions on lens choice, framing, and background. It’s the best training you can get.

When did you start Blackbird Productions, and what is its focus? What kinds of clients do you have?

It’s another hat I wear, and of late, I wear it a lot. I started taking on many more video jobs where I would either shoot, direct, or edit (and sometimes do all), so it’s the container that this part of my work gets put away in. I’m aiming at having more agency ad work, especially with the resurgence of for-online TVCs. I prefer ad work because it is always fresh and short in duration. I’ve worked for clients like Ogilvy & Mather, JWT, Metia, Nokia recently.

In some of your work, the conceptual and the commercial are melded in interesting ways. Can you explain a little about your philosophy and methods for creating what you’ve called “exaggerated realities?”

I’ve always loved the “post” element equally. It extends the creative process, which would have historically ended after you hit the shutter button, more or less. The approach allows you to keep on chiseling away at the block to refine your message. The freedom at this stage is also limited by what you imagine. It can be liberating, but one has to be wary of not being clear in what you’re trying to express.

You are quite adept at manipulating images in post-production to achieve stunning results. Do you feel this has become more accepted in the photographic community? Is the line between photographer and digital artist now being blurred to the point of irrelevance?

A photograph is not a representation of reality. If your aim isn’t to archive an event, then you should have the liberty to process the image as you want. Though I can see the allure of something that was the result of pure skill and talent vs. something that came about from a one-button preset!

Can you tell me about your trip to the Himalayas where you did some filming with drones?

I spent some time up in Leh last year and I wanted to document the trip as well as I could. Using drones in such visually stunning areas only amplifies the end product. I learned that traveling with a drone is not easy, and managing your battery levels is of paramount importance. I rescued a falling drone from a near certain end when it fell into a tributary after a battery went flat. Thanks to the pure salt-less river water, no corrosion occurred.

What do you have planned for the Wildlife Photography course in Peru? What kinds of activities can your students expect?

While Robin will be sharing a lot more of his experiences and skills, I will be instructing on camera operation in challenging environments. I will also demo drone filming.

Can you describe the drones and other gear that you will be using?

While it’s not possible to teach piloting a quadcopter in such a limited amount of time, I will be showing how it can instantly add an immense amount of value to the production especially in lovely establishing shots of the environment. We will be using the 5D Mk3 (though Robin will bring his Red Dragon) for the filming instruction. The drone is a team Blacksheep Discovery Pro with a stabilizing gimbal.

What excites you most about going to this site the Peruvian Amazon? Are there any specific images you hope to capture, and/or wildlife that you hope to encounter?

It’s going to be interesting to conduct this course in such a remote location. I’d love to be able to capture the monkeys going about their business! ¶

This aerial reel was produced by Keshav Sishta using a drone and attached camera, both of which he will be demonstrating on our Wildlife Cinematography course. Most of this footage was shot in the Himalayas in northern India, while the rest is from the island of Singapore, where Keshav lives. See more of his commercial work on his Vimeo channel.

Space is still available in our Wildlife Cinematography course.