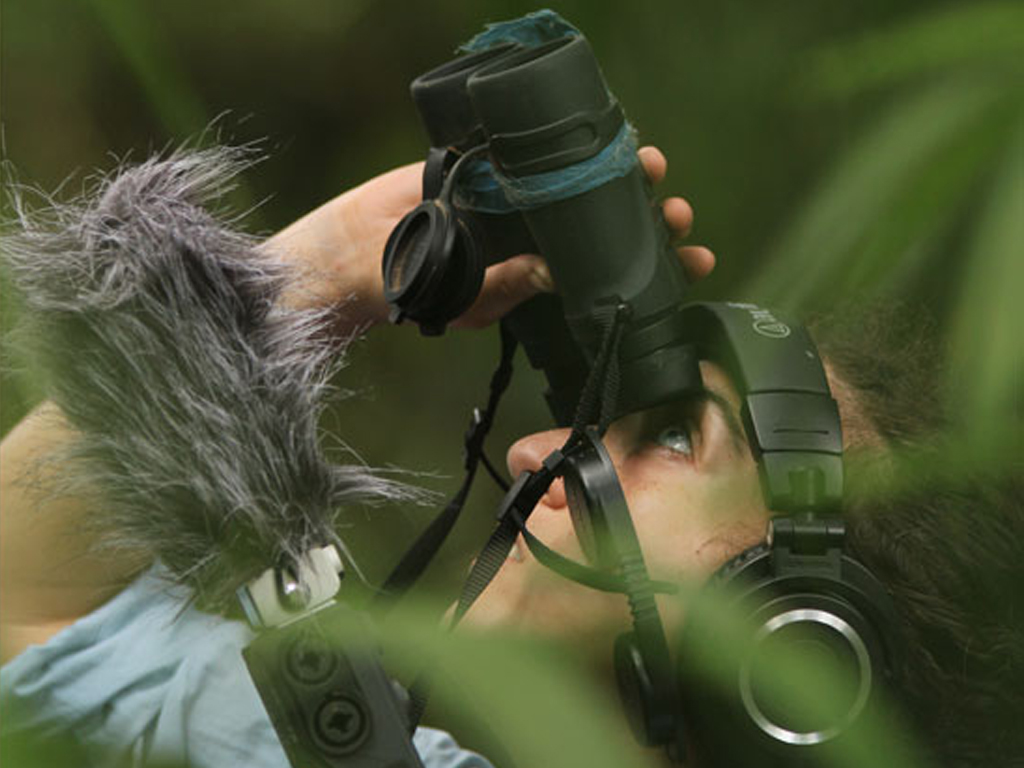 Growing up in small town New Jersey, just 15 minutes away from the Manhattan skyline, future doctoral student Effie Robakis could not have imagined that her life choices would culminate in months spent deep in the Peruvian Amazon following monkeys with a microphone in hand, braving botflies while sloshing around in mud-breached boots. It all started, as it often does, with an inspirational high school teacher who recognized her aptitude for science, and who particularly encouraged her penchant for evolutionary biology and primatology.

Years later, after getting an Anthropology degree from Tulane in New Orleans, Effie ended up back in graduate school at Washington University in St. Louis, where FPI is based. From there it was just a matter of time until she met Mini and Gideon Erkenswick Watsa, who had been running a tamarin trap and recapture program for years in the Amazon, pursuing their own research into genetic chimerism and parasite-host relationships. “Long-term studies on individually identified animals are few and far between,” says Effie, underscoring her good fortune. She adds that the callitrichid population used in Mini and Gideon’s studies provided a perfect model for the kinds of questions that she wanted to ask as well. 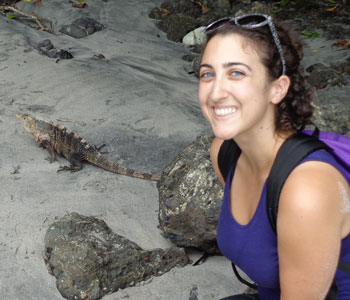 “My main interest is in dispersal: the ways in which animals leave their natal groups and forge new relationships and create new networks,” she explains. Such migrations away from the family are essential to a healthy population, but researchers do not yet fully understand the mechanisms that drive this behavior in many species. For instance, tamarins like the ones Effie studies (Saguinus imperator and Saguinus fuscicollis) are not necessarily just popping over to join the adjacent group as soon as they reach adulthood. They will often wait for just the right moment (whatever that is) before saying their fond farewells, and then they frequently travel much farther than just next door.

“Despite the fact that groups of each species overlap, and [they] will often range together for part of the day, they never mate across species,” Effie notes. Rather than hook up with the nearest available option, there is some mechanism at play that allows them to hold out and locate their own kind. It appears that they could potentially crossbreed if they chose to do so, which would probably produce at least an F1 (first generation) hybrid, but instead it seems they prefer to seek their reproductive fortune elsewhere.

“So how are they doing it?” Effie asks rhetorically, but in earnest. She thinks that they use vocalizations “to advertise that they are ready to disperse,” reasoning that such calls are the only way to flexibly communicate over the necessary distances. The dispersing tamarin needs to know that there’s someone out there, some place (con)specific to go, rather than just crossing their fingers, leaving home, and hoping for the best.

Since tamarins disperse during the summer months, Effie focuses on doing her fieldwork during this time of year, which happily coincides with the dry season. While in the Madre de Dios region of Peru, she collects behavioral data and aims her shotgun microphone at the chatty tamarins to get extremely high-fidelity recordings of their calls. She first went there in 2014 to do a pilot study, then again returned last summer to assist with an FPI field course and finish her data collection. Even in the dry season, though, primate follows do not always go as planned. On “dud data days,” she can usually be found in the comedor, daydreaming about ice cream and lamenting the stench and stains now woven into the fabric of her clothes and her existence, the very notion of “clean” losing to the many compromises of relativity. 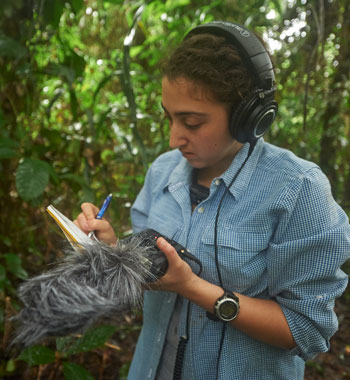 Upon returning to St Louis, Effie gets to use a washing machine (quite giddily), as well as work on obsessively analyzing the data that she has collected. She looks for bioacoustic parameters that might indicate specific information, like age and sex. These parameters include things like overall duration and number of syllables in a call, how far into the call peak volume is reached (and at what pitch), the average pitch of the entire call, and how much the pitch differs throughout the call. While it is still too early to draw conclusions about her tamarin subjects, she notes that in other primates the total call duration, start fre
quency, and the end frequency can all vary significantly between the sexes. In fact, these parameters can sometimes be unique enough to identify individuals.

What Effie does know about the tamarin population around the Los Amigos Biological Station is that the long calls of Saddleback and Emperor tamarins are very different: both in how they sound and how they appear on a spectrogram. She thinks these differences in their loud, long-distance vocalizations are what might help them disperse more effectively and find conspecific mates. This process is not as straightforward an endeavor as you might imagine.

As mentioned earlier, these tamarins don’t simply leave their natal groups as soon as they are sexually mature. They can wait for months or even years. Sometimes they will even disperse more than once on their quest for reproductive opportunity. What triggers and directs this behavior is poorly understood. How are they finding mates and avoiding inbreeding, while also traversing unknown jungle territory fraught with predators?

“If we can figure out how they’re doing it, we could learn a lot about reproductive systems, social systems, and possibly even about the behavioral underpinnings of complex communication,” Effie explains. There may even be implications for conservation, she adds: “animals in fragmented forest may only need corridors as big as they are able to communicate and disperse over.”

These questions have absorbed Effie as she works to complete her dissertation. Her brief pockets of free time are packed full with live music, baking, coloring books, and ambitious “apartment hacks” involving wall-mounted terrariums. While her talent at killing houseplants is unrivaled, she is hoping to turn over a new leaf soon… and to keep it alive. 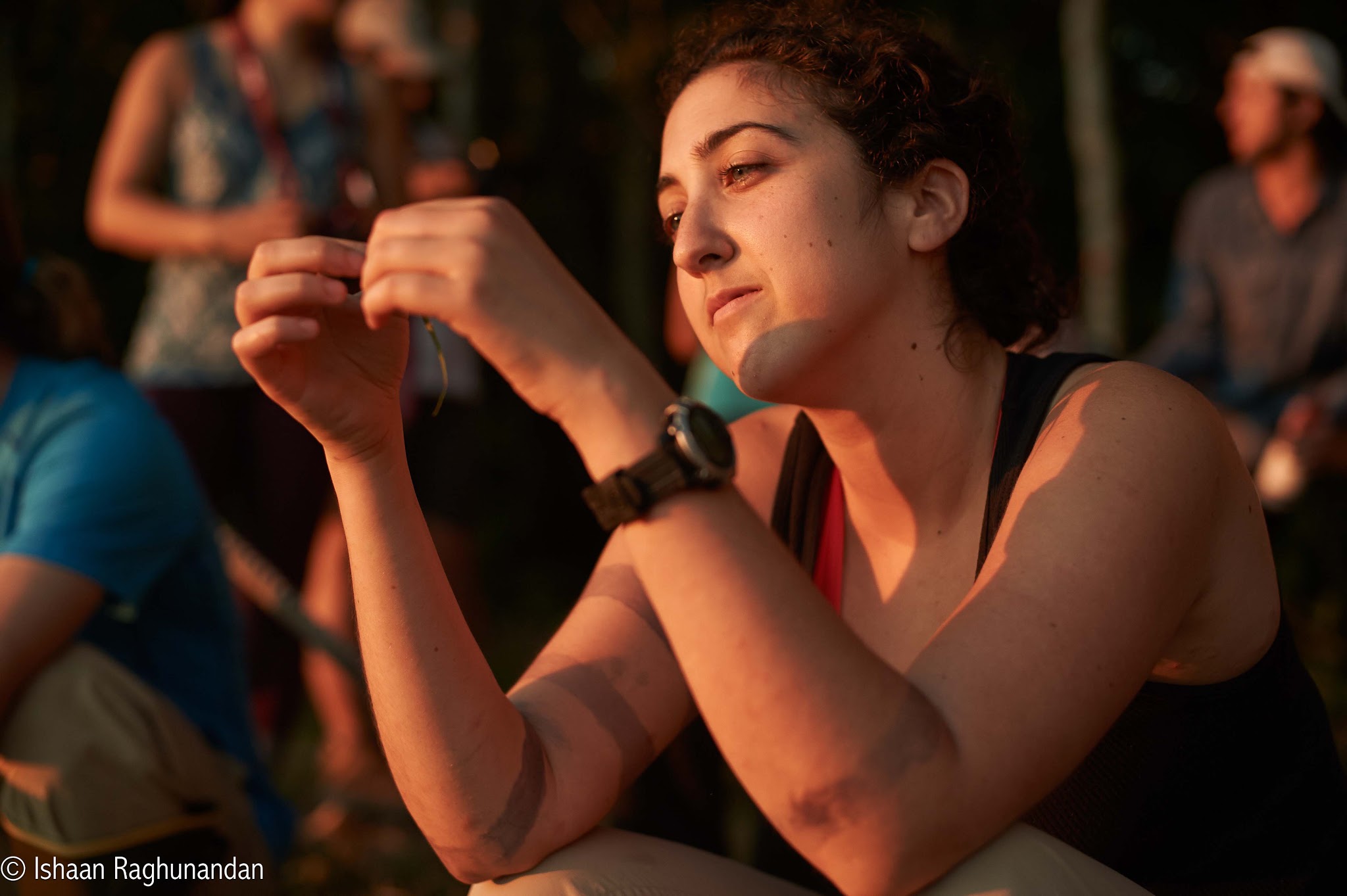