In the tropics, the seasons can be determined by the amount of rainfall or alternatively, the number of monkeys in your immediate vicinity. While the latter is more of subjective measure, it is quite useful for researchers battling seasonal affective disorder. For these intrepid jungle jockeys, winter is a time of low primate density, causing sadness and despair. It is only when hope leaps and bounds across the canopy in the form of playful platyrrhines that spring has truly sprung anew. 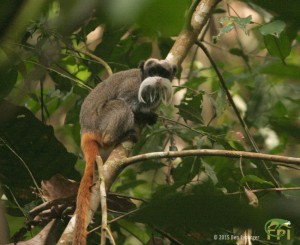 For me, this happened when I was at my lowest, trudging through the jungle with a telemetry unit receiving signals from the lost souls of the damned. Rather than giving me useful cues to locate my tamarin group, it was leading me astray with demonic blips and belches that wore on my sanity. Furthermore, when you spend too long without monkey in your field of vision, and you have a sweaty face that only a mother and a thousand bloodthirsty mosquitoes can love, you can start to feel a little down in the dumps. But just as I was ready to give up, cast the telemetry wand into the fires of hell from whence it came, and eat my emergency cookie stash in a huff, I heard some high pitched whining not twenty feet from me.

It was an emperor tamarin and he wasn’t nearly as thrilled to see me as I was to see him. Soon, I located the rest of his troupe, and even a group of saddleback tamarins enjoying those same fruit trees. The guest list for this gathering did not end there, either. I heard some grunting clucks above me, and saw a delegation of saki monkeys foraging in the canopy as well. And what monkey encounter would be complete without a titi monkey creeping on the periphery… just watching.

If it were just me relaying my strange elation from experiencing a cavalcade of monkeys, you’d probably just write me off as primate-crazed lunatic and go on with your day. However, my friend Alejandra not only reports having had a very similar experience after returning to the field in March 2015, but she even coined the phrase “monkey season.”

It was her second day back at CICRA, and she come back to be to be trained by project coordinator, Alice Poirier, in preparation for this year’s Mark & Recapture program. The morning had commenced inauspiciously with a late start at 7:40am, and Ale’s expectations for the day were pretty low. After just 16 minutes on the trail, however, she began to change her tune.

First, they casually bumped into five emperor tamarins, which portended of great things to come. Shortly after bidding those mustachioed denizens adieu, they spotted eight saki monkeys who were keeping tabs on them from the treetops. “It was my first time seeing [sakis] and I was thrilled!” Ale reports, also recalling that she had “started shooting pics left and right trying to get a nice shot while Alice was shouting ¿¿Ya podemos avanzar??” (Can we move forward now?!)

Things remained quiet for the next three hours of hiking before suddenly Ale witnessed “three pairs of huge vigilant eyes,” just two and a half meters away from her, hidden inside the pacales (bamboo).

“I stopped, I didn’t recognize them but didn’t want to scare them away either,” Ale recounts. She trained her eyes upon the ones staring back at her, and soon realized that they belonged to a group of night monkeys!

Unfortunately, Alice did not get to share in this rare midday sighting, since they heard her approach and fled, but Alice did get to witness Ale “smiling from ear to ear” in that special way that lets a person know you just saw some friggin’ monkeys.

Oddly enough, Ale and Alice’s sightings were not yet done. The day still had four saddleback tamarins, one titi monkey, two more sakis, and one last emperor tamarin to come.

“I never felt like that before,” Ale remembers. “For the first time, I truly believed I was in the right place.”

This connection to the Amazon had brought her a deep satisfaction and clarity, which translated into a hunger to experience more.

“Monkey season had begun,” she says, “and I was ready to go for it.”