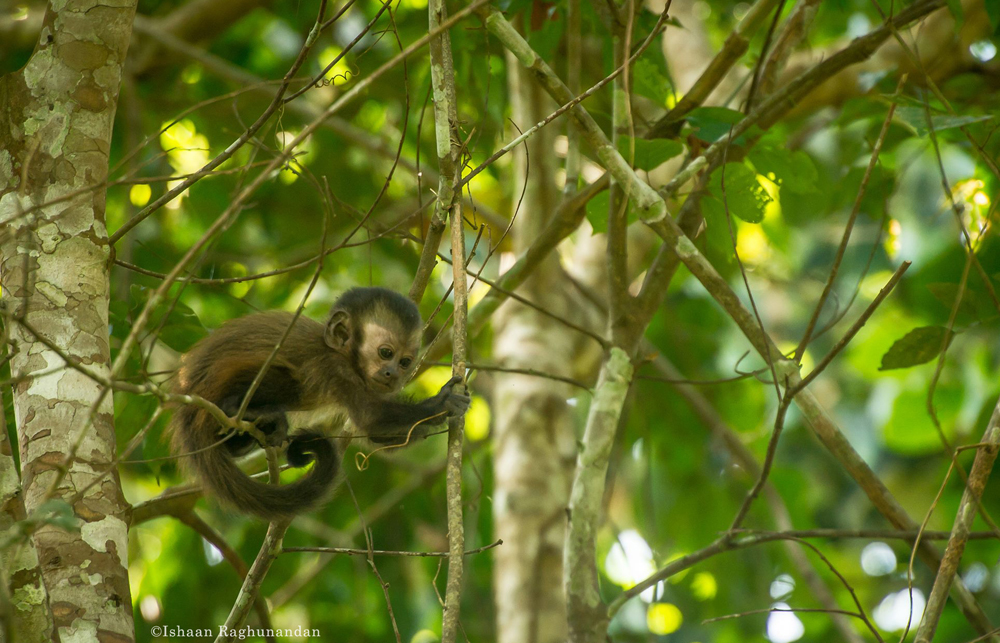 It was a typical afternoon in the Amazon when suddenly a troop of capuchin monkeys stormed through camp in a bluster of bending branches and daring leaps. Almost anyone who witnesses such a commotion instantly admires the deft movements, and once your eyes lock with one of the monkeys you sense a mental agility as well. Capuchins are frequently noted as the most clever of the Neotropical primates, and this species — Sapajus macrocephalus (sometimes considered a subspecies of Sapajus apella) — has a big head to match this savvy reputation.

However, even the brainiest primate is prone to errors. As the clatter and chaos passed, our researchers immediately discovered that a very young juvenile was left behind by the group, which had been moving too quickly for him to keep up. Unlike when similar things happen in 90s comedy movie plots, zany high jinks did not follow. Instead, the tiny monkey called and called for a very long time: alone and scared.

While certainly any number of jungle creatures might have savored a tasty capuchin snack, this may not have been the terrible lapse in alloparenting competence that it seemed. Researchers have found that some habituated primates use the presence of observers “as human shields,” and will alter their risk-taking behaviors accordingly. Perhaps this capuchin group felt the humans were no threat, and that their presence might give them a break and actually protect their little one from potential predators.

More likely, however, it was a simple mistake that any well-meaning primate could make. The tiny juvenile, having no hope of catching up with his group, just kept calling desperately to be picked up, until suddenly the panicked monkey fell completely out of a tree! The drop from the branch was about 20 feet, and he hit the ground with an audible thud.

It was beautiful to see the little guy get picked up again,” says Ishaan with a note of relief.

“I knew immediately that I couldn’t interfere,” recounts Ishaan Raghunandan, who understood that even well-meaning intervention was neither advised nor permitted. “So we stood back and watched him climb up again, making slow progress in the direction of the group.” Eventually another group member came back for the stranded monkey, and everyone allowed themselves a deep breath.

“It was beautiful to see the little guy get picked up again,” says Ishaan with a note of relief. The yelping had stopped, and the frightening ordeal was now over. As the baby and his rescuer made their way back to the rest of the group, they stopped for a comforting snack of cocao seeds. Even for capuchin kids, a good treat can make everything all better.¶