Snakes: Food or Foe for Monkeys?

Scientists have observed their fair share of snakes preying on1-5 New World monkeys. For the most part, snakes that pose a threat are either constrictors or venomous. Monkeys can react to a snake by looking intently at it, vocalizing, and “mobbing” it: a word for a group of anti-predator behaviors that can include approaching a threat, aggressively shaking branch, and having their hair stand on end. Capuchins have even, remarkably, been seen whacking6 a snake with a branch. 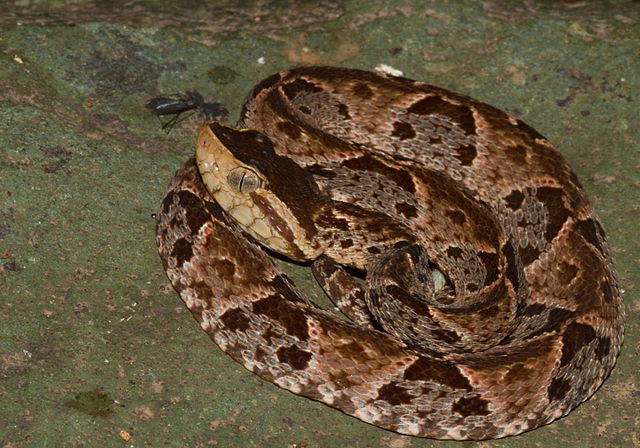 This presents an intriguing set of questions. How does a monkey decide whether a snake is food or foe? What cues are they looking for, and how can we be sure they’re noticing what we think they’re noticing? Can they distinguish between dangerous snakes and their mimics?

Predation can be tricky to study. If a predator is good at what it does, you won’t know it’s there, and by the time it’s got its jaws around its dinner, a lot of the important parts might be long over. There’s also the distinct possibility that your very presence as an observer might discourage9 a predator from making its move. But observing predator-prey interactions is important to how we understand animals and their behaviors, because —though they may be rare— predation events are an important10 selective pressure. More than being bad at finding food, or not getting along with your group-mates, one gulp by a predator and your potential to reproduce isn’t just damaged, it’s gone forever.

One way to get around some of the obstacles to researching predation is by studying a group of animals for years at a time; if you stick around long enough, you’re more likely to end up seeing some unusual things. 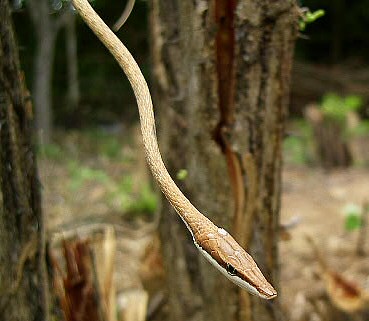 But with a bit of ingenuity, scientists can also move predation, and their ability to observe it, from the realm of rare-and-dangerous to repeatable-and-safe. To create a non-threatening facsimile of a predation event, researchers use various tools, such as playing the vocalizations of predators to prey animals, or showing them plastic versions of predators. This way, researchers can observe —many more times than they would if they had to rely on chance encounters alone (and, critically, without putting prey in danger)— how an animal reacts to a threat.

Observational and experimental studies have shown that monkeys distinguish between aerial11 (like a bird of prey) and terrestrial12 (like an ocelot or a snake) predators. A monkey might look up to the sky or run into the safety of the dense canopy if it hears a hawk’s screech13, but it doesn’t have to rely solely on its own observations—a group mate’s alarm call can convey “snake!” or “hawk!” just as well. A 2013 study14 even showed that titi monkeys produce call sequences that mix and match predator type (aerial, terrestrial) and location (canopy, ground) into several informative call combinations.

So monkeys are both observant and prepared to act when it comes to snakes. But how do they decide between threat and meal?

In an experimental study15, researchers presented pictures of snakes to white-faced capuchins (Cebus capucinus) and found that adults spent significantly more time alarm calling and looking at representations of boas and rattlesnakes than non-predatory snakes or a white, snake-shaped control stimulus. Though this distinction may seem obvious to a casual observer, it proves a very important point: monkeys don’t just freak out at anything snake-shaped; they’re paying attention and making decisions.

In a comprehensive7 collection of observations of monkey-snake interactions made over four years, scientists found that, of the snakes that could be identified, bearded capuchins (Sapajus libidinosus) mostly ate small, non-venomous colubrids—a family of largely harmless snakes. On the other hand, snakes that elicited defensive reactions were more diverse, but definitely more likely to be dangerous—a group that included pit vipers and constrictors, as well as their mimics.

So what are the monkeys looking for? The authors noted that snake size was an excellent predictor of whether monkeys would react defensively. For smaller snakes, the authors suggested that coloration (as in a coral snake) or sound (like a rattlesnake) might also help them detect whether they are venomous or not.

For now, these are the only published studies we have looking into this unusual behavior in New World monkeys, and a great many questions remain—are color and pattern equally important? Does seasonality or food scarcity play into a monkey’s decision to eat a snake? And what about species besides capuchins? What does this mean for the evolution of anti-predator behaviors, both in snakes and monkeys? Only more data and new experiments will help unravel this fascinating phenomenon.

4 Ferrari, S. F., & Beltrao-Mendes, R. (2011). Do snakes represent the principal predatory threat to callitrichids? Fatal attack of a viper (Bothrops leucurus) on a common marmoset (Callithrix jacchus) in the Atlantic Forest of the Brazilian Northeast. Primates, 52(3), 207.

PrevPrevious“A Trick of the Tail”: Prehensile Tails and Primate Evolution