[attention title=”Amazon Wired”]Varun Swamy, field course instructor (see Amazonian ABCs), is also one of the co-founders of the Amazon Wired project. Here he tells us how megaflora are really just as interesting as megafauna. This article originally appeared on the Rainforest Expeditions blog on June 19, 2017. To get to know Varun better, check out his unique Ask Me Anything Reddit session that recently took place. [/attention]

(Borrowing from a J&B whisky commercial from the 1990s…)

Tradition says: “A tree must begin its life from the forest floor”.

Tradition says:  “A tree shall form a relatively cylindrical trunk”.

Tradition says: “A tree shalt not kill another tree”.

Well, strangler fig trees clearly did not receive these edicts…or perhaps they did, and decided “To Hell with tradition!” – much to the delight of aficionados of bizarre, spectacular tropical nature of the floral kind. 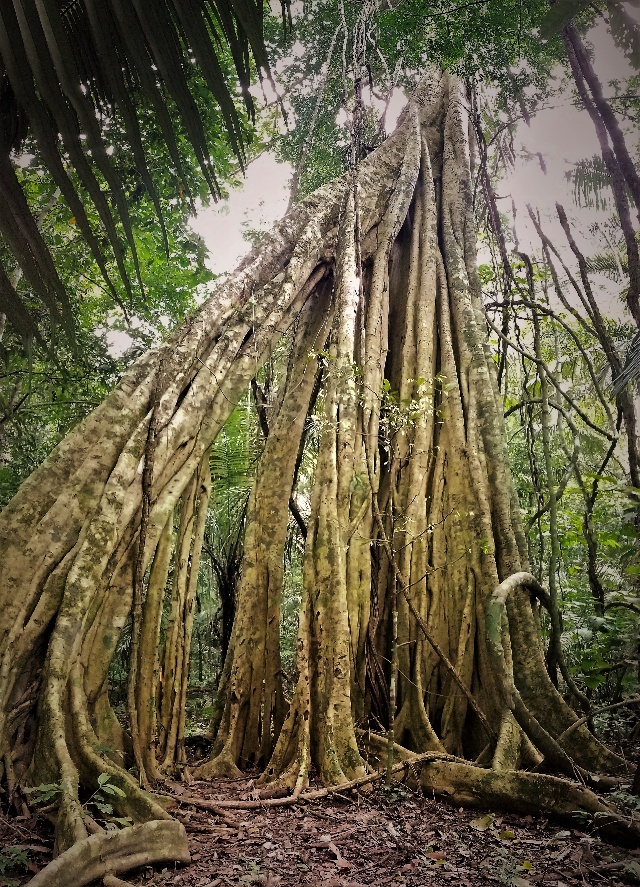 Strangler fig trees, or matapalos (literally, “killer stick”) as they are known locally in Peru, belong to the genus Ficus in the Moraceae (mulberry) family. There are about 850 species of Ficus worldwide – the majority of these are found in tropical forests across the world, as well as a few species native to temperate climates such as the widely cultivated common fig Ficus carica. Ficus ypsilophlebia, a spectacular and emblematic strangler fig species of the Amazon rainforest (Photo: Varun Swamy)

Strangler figs are a sub-group of mostly tropical Ficus trees that decided to buck tradition somewhere along their evolutionary pathway, beginning their lives on a host tree instead of on the ground. That strategy isn’t unusual in itself – Amazon rainforests are replete with epiphytic plants that depend on host trees for habitat, or, in the case of lianas to make their way up to the canopy. However, the ~150 species of Amazonian strangler fig trees are unique in that they eventually end up killing their unfortunate host, in a vividly twisted, slow, silent embrace of death that take place over multiple decades. It is a fascinating process to observe in snapshots, with each strangler fig species appearing to possess a subtly unique “stranglehold” move.

“Embrace of death”: strangler fig trees in the process of enveloping and eventually killing their host tree (Photos: Varun Swamy)

Walking through the rainforest and coming upon a strangler fig in the act of arboricide, it is hard not to feel a twinge of pity for the hapless host tree, whose eventual fate is already sealed and can only bear mute witness as their silent assassins weave their slow and suffocating embrace! The end result though is worth the sacrifice of the host tree: mature stranger fig trees are eminently worthy of the charismatic megaflora moniker, with enormous crowns spanning over 30 meters, colossal trunks more a meter thick, and splendidly irregular buttresses and sinuous roots often extending well beyond the width of their crowns.

But strangler figs, bizarre lifestyle and spectacular growth forms aside, are far more than mere ecological oddities. “Who eats figs? Everybody”. That was the succinct summary of the importance of the genus Ficus by eminent tropical ecologist Daniel Janzen, in a review titled “How to be a fig”. Strangler figs are keystone fruit resources – they belong to a very small group of plant species that fruit during the dry season and provide a critical hand to fruit-eating rainforest animals in surviving the boom-and-bust Amazon rainforest. A fruiting strangler fig tree during the peak of the dry season (June-August) in Tambopata is a magnet for frugivores of all sizes, forms and lifestyles: monkeys, birds, bats, coatis, kinkajous, peccaries and rodents…in the canopy, on the ground, all day and night! In making their way over to fruiting strangler figs, frugivorous animals disperse seeds of a variety of other rainforest trees whose fruits they have consumed along the way. So strangler figs act as “diversity engines” by facilitating the seeding of the rainforest floor with a variety of other tree species.

Furthermore, strangler fig trees are very good indicators of the relative age of a rainforest – after all, it takes a while to grow roots down to the ground starting on a host tree trunk or canopy several meters above, eventually kill your host…and oftentimes hide the evidence by growing inward to fill in the gap left behind by your dead and decomposed host! Given that host trees of strangler figs are often enormous canopy trees and charismatic megaflora themselves, it is a good guess that an Amazon rainforest with large, free-standing stranger fig trees is at least a couple of centuries old, and probably much older.

Visitors to Tambopata National Reserve can look forward to meeting a variety of these charismatic silent assassins / diversity engines / rainforest timekeepers at various stages of their unique journey and lifestyle, at all three of Rainforest Expeditions lodges: Posada Amazonas, Refugio Amazonas and Tambopata Research Center.