The following is an excerpt from the journal of one of our research assistants, Alexandra Schaening, who is helping to trap tamarins in the field for disease screening. 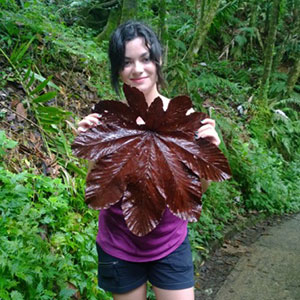 I started a stakeout at trap 28 for emperor tamarins and ended up with something much bigger. (dun dun DUNNNNNN)

Two emps came and went early that morning and took my bait at around 6:40 or so. I thought it was a little odd that there was only two in the area and I couldn’t hear any others calling. They left and I had the trap re-baited by 7:18.

At first I started doodling to pass the time, but unhappy with that I decided to bird watch. Laying on my back, I was looking up, holding my binoculars to look out for birds going by, but saw almost none. I was beginning to drift off and so before I passed out completely, I started sitting up to wake myself up. Right then I looked to the side and saw a flash of brown fur and something moving to the left of me.

I thought it could be a tayra or a jaguarundi and got excited so I put my hand on my camera and watched it moving through the gap in the trees.

It was hidden by some lianas and trees at first, but when it moved I saw it’s tail, which seemed bigger and paler than I initially thought it was, and it had a dark tip to it.

I froze in mid sitting up position. She moved forward (I could see her profile), and that’s when I noticed she was taller than I had previously thought (maybe roughly around two feet?), since she was crouched before and crawling through into a wider clearing and that’s when I knew for sure it was a puma. She was only about 3-4 meters away from me.

She walked into the sunlight and that’s when I sat up immediately, and she turned her head at the sound looking right at me for a second. I could clearly see her face. Her back was arched like a scared house cat, like she was surprised at seeing me and that’s when the puma sort of slunk off into the trees down what looked like the trail heading towards [trail] 10 and disappeared. She was so unbelievably quiet for such a big mammal. I was amazed I never really heard it coming. I was spooked and kind of in shock after that, so I sort of just got on my feet standing up slowly, grabbed my tarp, my water bottle, and my pocketknife and left everything else on the spot. Then I walked down the trail and went quickly back to camp down trail 19.