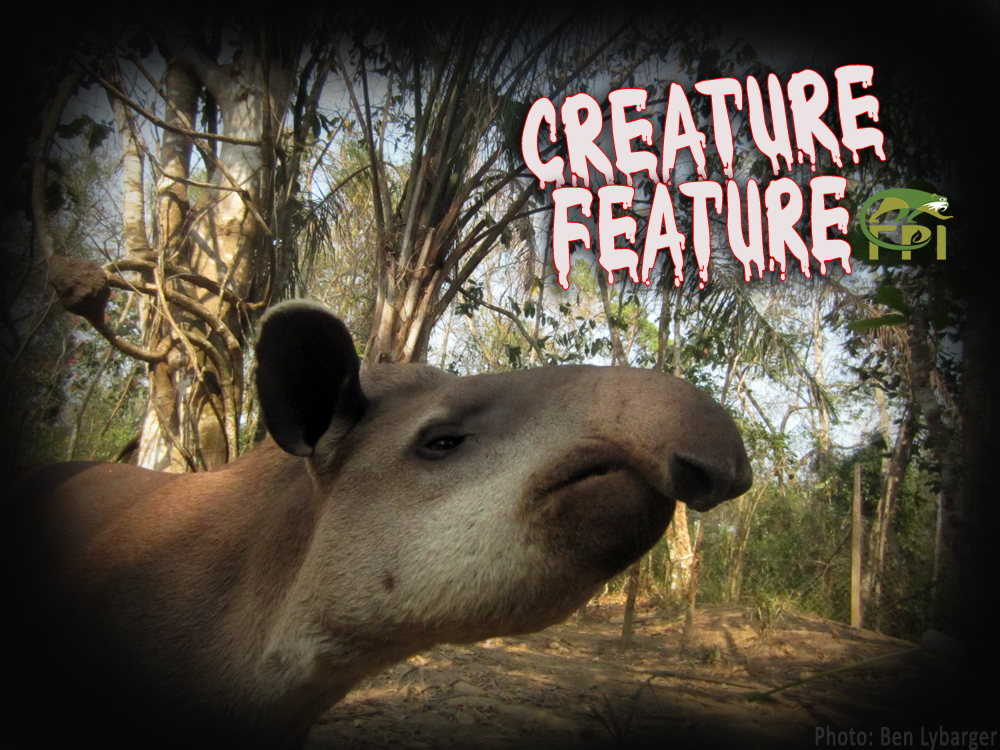 As the largest land mammal in South America, at first glance the tapir appears to be a good candidate for most fearsome forest dweller of the neotropics. Indeed, the size of this nocturnal beast makes jaguars the only non-human hunter of any real concern, but even those apex predators struggle to take down a 600 pound tapir barreling through thick branches and brambles at breakneck speeds, like leatherfaced juggernauts of pain. Add to this certain cases of humans being attacked my maternally outraged tapirs and you’d think you have the makings of a legendary Amazonian monster.

But you’d be dead wrong. 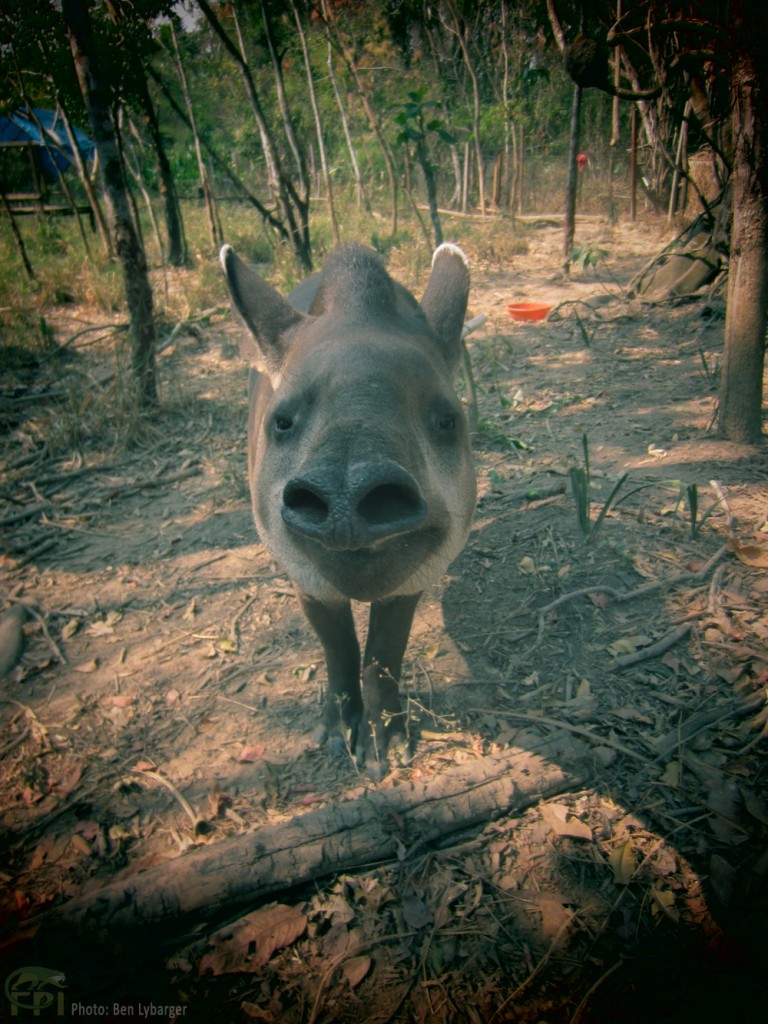 Tapirs are actually quite shy, and only display aggression in rare circumstances when they are under duress. To make their nomination into the Halls of Terror even more comical, these pudgy herbivores communicate with chirpy squeaks and whistles far more heart warming than blood curdling. And then there is the matter of their prehensile trunks. While elephant trunks are famously stalwart appendages – truly muscular multi-tools exhibiting one of evolution’s greatest triumphs – the tapir’s trunk is a dinky, wagging snout by comparison. It’s adorably ridiculous, but hardly a threat to anything but the self-esteem of a pig, whose boring, stationary nose is a total yawn.

What the tapir lacks in trunk size, though, it more than makes up for with a spectacularly disturbing penis that is equal parts colossal and wily. I can personally attest from my time spent caring for a couple of rescued tapirs in Bolivia that this is – hands down – the most frightening thing about them. Whenever we’d feed these eager fellows, their excitement for fruit was especially apparent. An awkward ballet of flailing of anatomy would occur that still haunts my dreams to this day. 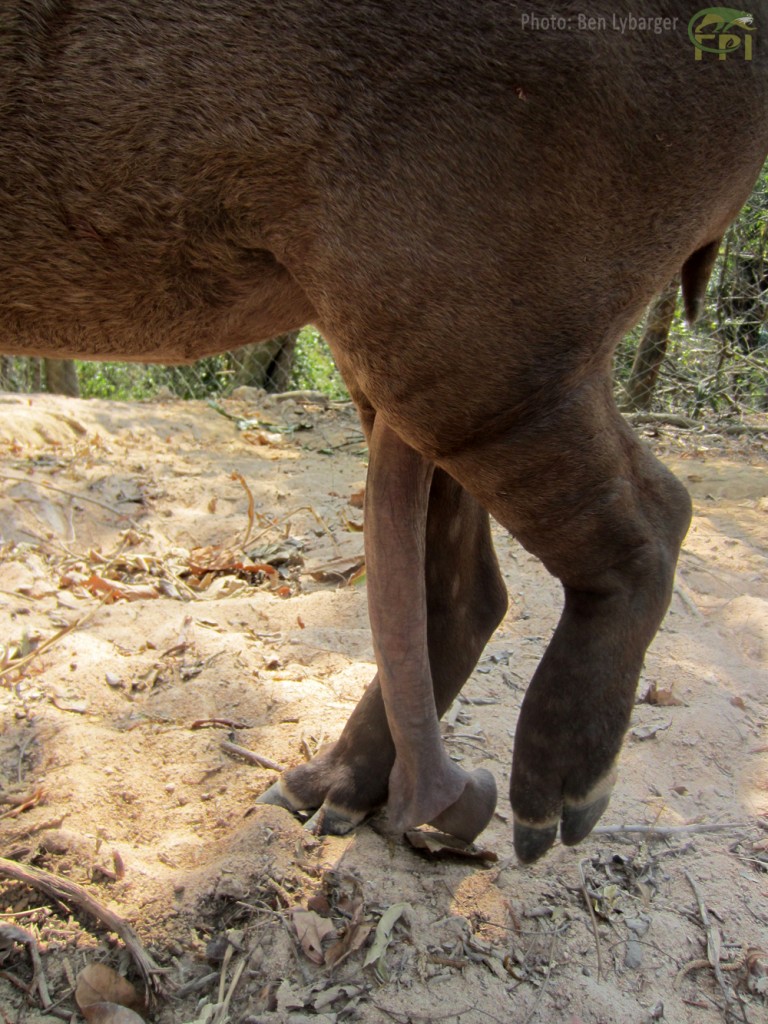 Oddly enough, if you are stricken with such nightmares about tapirs, this may be the one case where the poison actually is the cure. In Japanese mythology, the Baku (chimerical creatures reminiscent of Malayan tapirs) can be summoned to eat your bad dreams. Just be careful not to over-utilize their dream-devouring services, or else the hungry Baku may eat more than just your nightmares. Nothing caps off a belly-busting meal of subconscious neuroses like the psychogenic sweetness of your life’s goals and ambitions. If this dream-munching business by a wiggle-snouted weirdo is starting to sound a bit familiar, you are probably thinking of the Drowzee Pokémon based on Baku, and are a total nerd.

One can start to see a theme begin to emerge with these animals as not fully trustworthy creatures. Despite their vaguely piggish appearance, tapirs fall on the other side of that great ungulate divide. While pigs, cattle, goats, deer, and camels all roll heavy with the Artiodactyla crew (aka the even-toed ungulates), tapirs belong with horses, rhinos, and the other odd-toed ungulates in the Fraternal Order of Perissodactyla. Stranger yet, these broad-bellied jungle giants surprise once again by being excellent swimmers who can sink their bulbous girth well below the water’s surface to chomp on tasty plants (presumably when children’s nightmares are in scarce supply).

Never quite what they seem, even from a young age a tapir will practice its deception by being born with white stripes and dots that look nothing like its parents’ minimal pelage. I am guessing that the last few weeks of the 13-month gestation period is spent getting these markings just right, either for camouflage purposes or to make people’s Pinterest pages 90% more precious (#adorbs).

In ancient Andean folklore, the tapir historically held special significance in connection with shamans. As Daniel W. Gade, professor of geography at the University of Vermont, reports¹: many cultures around the world understood the paroxysms associated with epilepsy to be evidence of an oracle’s communion with a supernatural realm, and in Andean culture these appeared somewhat similar to the behavior of tapirs in the rut. Accordingly, over time the animal took on spiritual significance as holy men mined meaning from the tapir’s behaviors and peculiar anatomy.

Apart from its unique digitation as the only native perissodactyl of South America, “its outsized penis made the tapir a mythologically potent seducer of women,” relays Gade, who notes its “lascivious reputation among diverse native peoples.” Like the shamans themselves, the tapir was viewed as a trickster, again cementing its reputation as something revered but not fully trusted.

Sadly, the scariest thing about tapirs is that they could possibly go extinct in the wild, since all five species are currently vulnerable or endangered due to hunting and habitat loss. To lose these fascinating animals is bad enough, but considering the ecological role they play as seed dispersers, their diminishing numbers will likely have an outsized rippling effect throughout their enormous range.

My deepest hope is that the tapir continues to exist in places other than our dreams… and that goes double for their wily penises.

Gade, D. (1999). Epilepsy, Magic, and the Tapir in Andean America. In Nature and culture in the Andes. Madison: University of Wisconsin Press.