Tim’s lifelong fascination with herpetology has led him to explore some of the most remote places on earth in search of rare amphibians. Apart from his degree in biology,  he began is path toward becoming a consummate naturalist by chasing after the many lizards and snakes of the Mojave desert in California. In the 1990’s, he made his initial trip to Costa Rica and fell in love with the diversity that tropical forests hold. Soon after, he made his first trip to Peru where he discovered a dizzying array of frogs, snakes, lizards and  other creatures inhabiting even a single patch of forest. 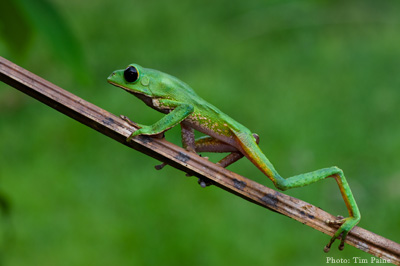 In the 20 years since his chase began, Tim has searched the diverse habitats around California, the western U.S. and occasionally the eastern half of the country, looking in streams, under rocks and logs, or anywhere else he could find these animals. Additionally, he has returned numerous times to Costa Rica, as well as Panama, Bolivia, and other countries uncovering incredibly rare herps. These travels include attending a conference in Brazil followed by a couple weeks with academic luminaries drinking the good life in search of reptiles, as well as spending time in the forests of Ecuador working on a survey of the local animals for the locally owned and operated Sani Lodge on the Rio Napo. Over the last few years, he has been “tagging along” on conservation and education projects in Chile, working with Dante Fenolio, Bill Lamar, the San Antonio Zoo, and Jose Nuñez of the Southern University of Chile, which has exposed him to completely new habitats and animals.

Tim’s partnership with FPI began after a chance (or not so) meeting with founders Mini and Gideon at the Los Amigos Biological Station in Peru many years ago. He introduced these primatologists to the world of herpetology with the infectious enthusiasm for which he is widely known. This immediately sent Mini and Gideon down the path of unrelenting love for reptiles and amphibians, while at the same time they were helping Tim on the path to recovery during a tense accident. Tim’s subsequent partnership with FPI grew out of a wonderful friendship, and today he not only assists as an instructor in the field, but also has been a longstanding board member.

While exploring the world through the lens of science, Tim also carries many other lenses into the jungle. Studying photography with an equal intensity, he has had images featured in gallery exhibits and educational settings, as well as published in small non-profit publications and esteemed scientific journals.  Tim also founded and maintains Amphibios.org, which combines stunning imagery with science outreach. 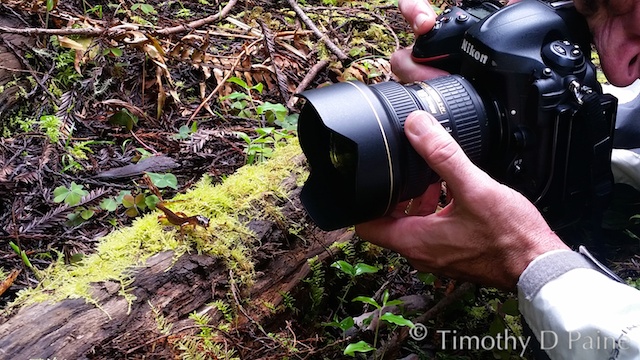 What Tim finds most gratifying is his educational output, as he tirelessly strives to elevate public opinion of – and discourse about – reptiles and amphibians. His passion for teaching about reptiles and amphibians was sparked by assisting Twan Leenders and an amazing staff, on the Forman Rainforest Project. He helped for several years, teaching some wonderful high school students, many experiencing their first ‘wild’ and out-of-country experiences in Costa Rica. Seeing the kids transform so quickly and learn so much in an alien environment was exceptionally rewarding, as was the discovery that no matter where he went there was no shortage of people willing and eager to learn about the local reptile and amphibian fauna.

Above all, Tim is extremely grateful for the countless friends and mentors who have helped and taught him as he pursued his life’s passions and goals. “I have friends and contacts in fields of conservation, captive husbandry, academia, and plain old boots on the ground all over the world which has given me a first rate, and yet always expanding and humbling worldview” he explains, adding: “If nothing else it lets me know that I have lots to explore and even more to learn.”